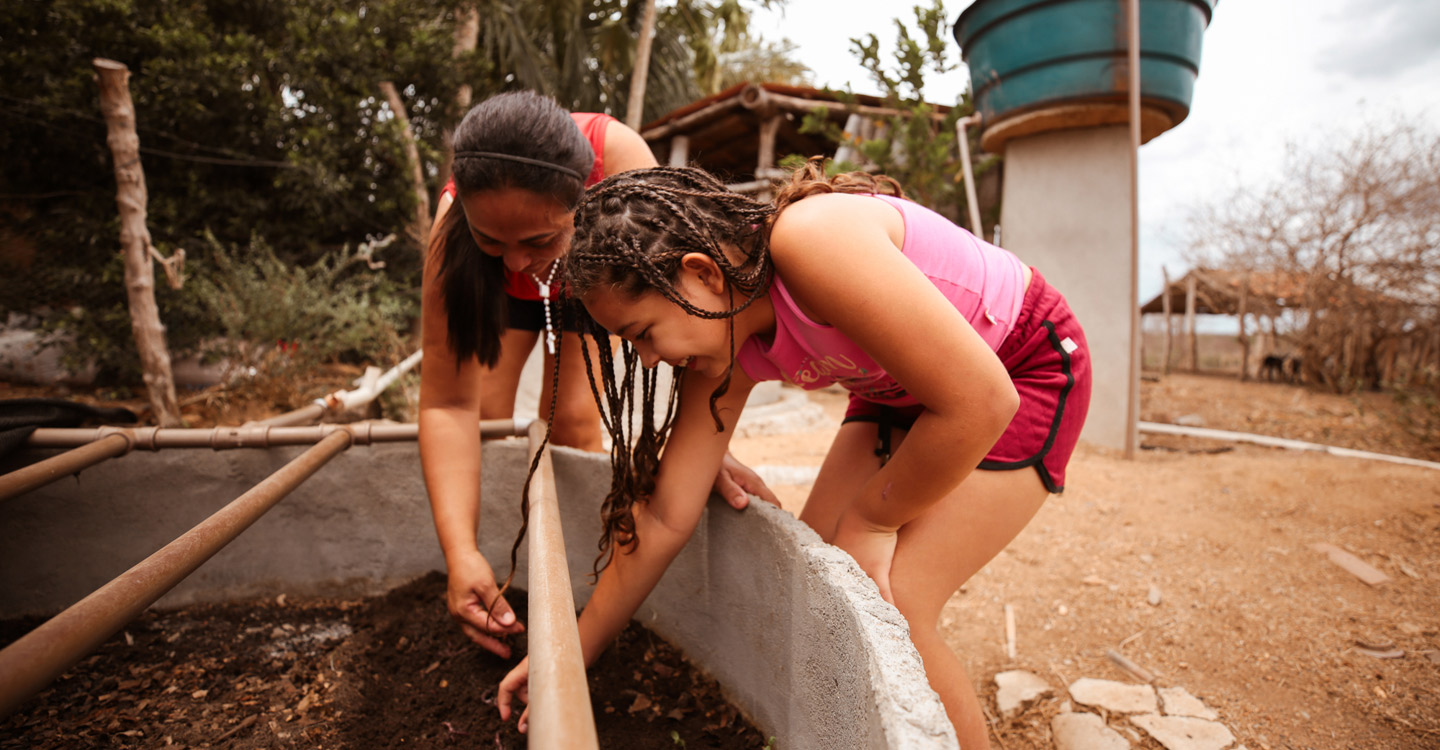 For centuries, people living in the sertão, Brazil’s semi-arid region, have struggled with a lack of water. The traditional systems of solidarity and mutual aid they’ve developed, like fundo de pasto communities, have helped them adapt to the harsh climatic conditions.

Over the last decades, though – thanks to support from IFAD and other development actors – modern ingenuity has joined ancient wisdom to help these communities squeeze a few more drops of water from Mother Nature.

The rural people of the sertão normally discard grey water – water left over from household sources such as sinks, showers and laundry – into open ditches. Besides being a potential health hazard (both from bacterial contamination and as an attractor of insects), this was quite a waste: grey water has enormous productive potential, and it was literally going untapped.

This prompted IFAD and other development actors to design a grey water system for use in family farming. The result is a simple, ecologically friendly wastewater treatment system that uses micro-organisms and earthworms to purify the input water.

The water is processed by passing through a series of tanks. In the first, solid and semi-solid materials (like cooking fat) are extracted; anaerobic decomposition takes place in the second; and a third eliminates the pathogens that would make the water unfit for irrigation or animal consumption.

The system is cheap (around US$1,000), easy to build and maintain, and has no need for chemical products. For a typical household of five, the system can process about 200 litres of grey water a day, making it available for reuse with crops and livestock.

“In five months, we reuse around 18,000 litres of water,” explains Maria. “That’s almost 50 per cent of the total amount we use around the house. In the yard we grow a great variety of vegetables, fruits and flowers. With a secure quantity of water, our production and income have stabilized.”

It may go without saying, but without a way to store water, life in the Brazilian semi-arid simply wouldn’t be possible. For this reason, the region is home to some 1.3 million cisterns that can hold a collective 28 million cubic metres of water to help bridge the 8-month dry season.

The region’s oldest cisterns, dating back to the 1970s, were built with the assistance of international cooperation agencies and parish campaigns. Then in 1999, a declaration signed by over 750 civil society organizations proposed the building of one million cisterns as part of a larger sustainable development programme for the region. That same programme is still benefiting families to this day.

Families are chosen for inclusion in the programme by a municipal commission. Once the families have guaranteed their basic drinking water supplies with a small cistern of 16,000 litres, they can apply for bigger cisterns that can secure enough water for agricultural production. These can hold up to 52,000 litres each – enough to ensure a steady water supply even in low-rainfall years.

Heleno Bento de Oliveira and Francisca Marte dos Santos, of the Lagoa do Brejinho community in Paraíba State, have developed an ingenious system over the years.

They started with just one cistern. Now they have an interconnected set of five, placed strategically to follow the flow of water across their lands. All told, they can store up to 115,000 litres of water.

An opportunity in every downpour

When it actually does rain in the sertão, it’s torrential. Making the most of these intense bursts requires the ability to accumulate a large amount of water in a short period of time.

Here, subterranean dams have proven ideal. These structures are constructed across small seasonal streams (i.e., those that don’t last past the rainy season) – but unlike typical dams, they’re designed to capture water underground. They consist of a low earth wall and an underground tarpaulin placed in a closed trench. The stream hits the wall, infiltrates the soil and is held back by the tarpaulin, which reaches down to the impermeable layers of the soil. Once saturated, these subsoil layers can stay moist for up to five months.

The cost of a subterranean dam varies between US$1,000 and US$2,000. The biggest ones can store up to 25 million litres.

Less than a decade ago, the Garcia family, from Penedo community in Paraíba State, had only a tiny cultivated plot that didn’t produce enough to feed themselves and their livestock. Nobody could say that today – their land is now packed with fruit trees and pastures that feed healthy animals.

Even in low-rainfall years, they produce beans and corn in abundance and sell roughly one tonne of fruit pulp – the base for those magnificent Brazilian juices – per month.

As Iranildo, the son, explains: “Before, this soil was exhausted – but thanks to the dam, it’s regained its fertility.”

Click here to learn more about adaptation techniques for the semi-arid region (available in Spanish and Portuguese only).