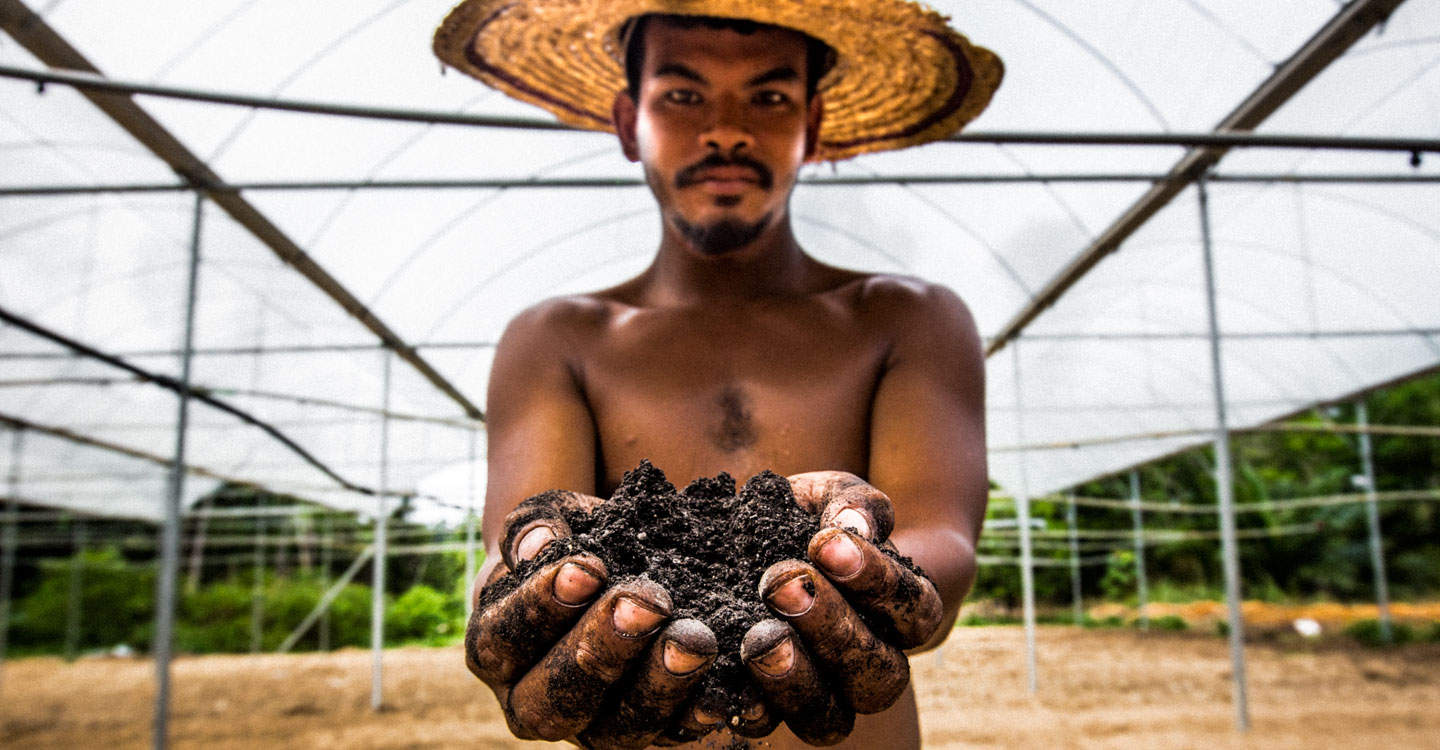 Have you ever seen a starling hopping around on the ground? If you have, you’ve also probably seen it stop all of a sudden, tilt its head and listen – then dig at the ground until it emerges with a wriggling earthworm in its beak. What the starling hears is beyond our capability to hear – and this limited capacity is part of why worlds like the earthworm’s pass beneath our notice. What we do not see or hear, we do not notice, and we often do not care about: out of sight means out of mind. It is only in the past couple of decades that we have started to explore and understand the intricate functions and links of ecosystems like these, including the soil ecosystem, and how important they are for our everyday world.

5 December is World Soil Day, so let’s dwell a little on this amazing world of earthworms, mites, fungi and microbes.

Soil makes up the outermost layer of our planet. It gets its characteristic texture from the various mineral particles it contains, such as sand, silt and clay, all of which have different sizes and are present in different proportions in different soils from around the globe. It also contains organic matter – living and dead organisms – in varying amounts and in different stages of decay. An average soil sample is about 50 per cent minerals and five per cent organic matter by weight, with water and air making up the rest. The topsoil – the first 5–20 centimetres – is the most productive layer. A single gram of soil can contain a billion bacterial cells, hundreds of meters of fungal hyphae (the filaments that connect fungal organisms) and thousands of different species, all of which constitute soil organisms.

Soil is the bedrock of agriculture. The soil is home to an intricate food web of decomposition and nutrient cycling, including a number of important physiological processes such as the carbon and nitrogen cycles. For agriculture, it is essential that this dead and decaying material is circulated back into use so that the nutrients can be made available to new crops. The biodiversity of the soil determines which nutrients are available to crops, whether stored underground or released to become the building blocks of new growth. Meanwhile, the physical structure of soil – supported by a bustling soil life with plenty of organic matter and vegetation coverage – makes it capable of filtering and retaining water, providing an important service for crops under hotter and drier climates. Some soil micro-organisms can degrade pollutants, and some can even process heavy metals – characteristics that are used in remediating contaminated soils. (For a comprehensive understanding of soil biodiversity and its functions, see the Global Soil Biodiversity Atlas.)

A number of IFAD’s projects adopt practices to increase soil fertility, reinforce its physical structure and safeguard biodiversity below ground. Many of these practices are based on the agroecological principles of diversification in production systems, such as mixing livestock and crop production, incorporating a wide variety of perennial and annual crops, increasing soil coverage, and developing synergies between different components at the field, farm or wider landscape level. These practices fundamentally increase the efficiency of resource use by recycling farm waste and completing nutrient cycles.

In a forthcoming IFAD publication on nature-based solutions, we have an intriguing case study from Lao PDR, where farmers use a local recipe to make a kind of compost soup. Agricultural residues are mixed with sugar and molasses, and the mixture is then stored until it matures into a “soup” of nutrients and microbes that, according to the locals, helps increase vegetable production and reduce pests. We do not yet know exactly how it works, but it will indeed be interesting to explore. Local practices like these might lead us closer to more sustainable and productive agricultural practices around the globe.

IFAD-supported projects also implement a number of other measures to enhance and safeguard soil biodiversity, including:

These practices, as part of wider integrated system approaches, will be presented in more detail in a forthcoming IFAD study on agroecology in small-scale producers’ farming and food systems practices within IFAD’s projects. To better highlight its contributions to enhancing and safeguarding biodiversity both above and below ground, IFAD is developing a Biodiversity Strategy and Action Plan. This plan will frame our approach to biodiversity and identify opportunities for IFAD to support small-scale producers and rural communities around the world as they adopt win-win solutions for biodiversity conservation, sustainable production of a variety of healthy foods, and income generation.

There are still many knowledge gaps in the area of soil biodiversity – both spatial and taxonomic. There is no “red list” for threatened micro-organisms, and there will not likely be one in the future. The smallest creatures, those we cannot see with the naked eye, can only be identified in the lab. Although we still lack a lot of information concerning what goes on underground and the spectrum of organisms that exist there, we know enough to fully recognize the vital roles they play in our lives. We must preserve them. We know that soil is more than just the minerals that form its basis. Rather, it is the biological debris, in all stages of decay and renewal, and the myriad of organisms to which it is home, that are the most important parts.

We need to be mindful of these invisible, tirelessly productive organisms and their ecosystem – not just today, but every day.