Spotlight on the International Year of Family Farming 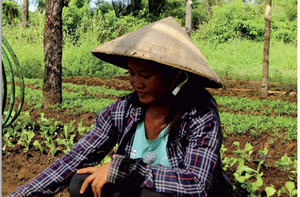 On 19 February 2014 at 10.00 a.m. you may follow via webcast a high-level panel on "Spotlight on the International Year of Family Farming".

To celebrate the International Year of Family Farming, a panel composed of farmer leaders and IFAD-funded project beneficiaries and stakeholders from Brazil, Colombia, Mali, Philippines, Syrian Arab Republic and the United Republic of Tanzania will discuss opportunities and challenges facing family farming and share their visions for the future of family farming.

Lucy Hockings, news presenter, will moderate the discussion with the speakers and the audience on:

Panellists
Ebrahim Georgette Aziz, is a farmer engaged in cotton and wheat cultivation and director of Al-Hasakah district of the IFAD-funded North-eastern Region Rural Development Project in the Syrian Arab Republic. Aziz serves as board member of the Women's Union in Al-Hasakah. She occupied the position of chief of the rural women's development section and coordinator of the unemployment project. Throughout her career, Aziz has conducted numerous awareness-raising campaigns targeting rural women on agriculture, economics, health and social issues.

Cielo Báez, is a farmer and member of the Asociación de Productores Agroecológicos de la Cuenca del Río Anaime (APACRA), a producers' association of the Río Anaime in Colombia. Baez is in charge of the transformation and marketing aspects of agricultural products such as fruits and vegetables. She is also a member of the community council.

Ibrahim Coulibaly, is the founder of the National Coordination of Peasant Organizations of Mali and a passionate supporter of family farming. Coulibaly is actively involved in the implementation of a new law to ensure food sovereignty. Coulibaly is also a member of the Association of Professional Farmers' Organizations (AOPP) in Mali (and a regional committee member of ROPPA).

Oliver Oliem, is a farmer and manager of the Atok Arabica Coffee Growers and Marketing Cooperative (ACOGMAC) in the Philippines. The cooperative brings together over 280 smallholder coffee and vegetable producers. He was instrumental in developing the coffee enterprise development plan for the IFAD-funded Second Cordillera Highland Agricultural Resource Development Project. Currently, he is developing the ACOGMAC internal guarantee system with the Agricultural Training Institute for certification of ACOGMAC as a producer and processor of organic Arabica coffee.

Yazidi Rashadi Shaaban, is a farmer field school ‘graduate' from the United Republic of Tanzania and lead adviser of JUWAPO/JUWAFO – an umbrella dairy farmers' organization. His farmer field school experience allowed him to learn about improved livestock husbandry techniques. By putting his new learning into practice, Shaaban was able to expand his activities. Today he not only has a thriving dairy production, but also is engaged in poultry and has installed a biogas plant.

Moderator
Lucy Hockings, a news presenter covering events such as the Asian tsunami in 2004, the global financial crisis in 2008 and the revolutions currently sweeping across the Middle East. She is also a professional moderator and has worked with both commercial companies and NGOs helping shape dynamic conferences and events. Hockings has worked with young people across Europe on leadership and future planning and is a key figure in the European BBC public speaking awards. She has worked a producer and reporter in her native New Zealand and freelanced in South-East Asia.

IFAD's Governing Council is an interactive event thanks to a number of social media components. Social reporters will keep the outside world informed through blogs, tweets, posting interviews and pictures on the following IFAD social media channels. You can follow the event via webcast and by following #ifadgc.

Follow live tweets on your mobile device at: http://app.multitu.de/ifad/ifadgc/