ROME, 13 February 2015 – The second global meeting of the Indigenous Peoples' Forum at IFAD wrapped up this afternoon after two days of deliberations on a range of issues, with a focus on traditional food systems and sustainable development.

The Forum convenes every second February in connection with the Governing Council, IFAD's main decision-making body. Its first global meeting took place in 2013. A unique initiative within the United Nations system, the Forum institutionalizes IFAD's consultation and dialogue with indigenous peoples' representatives at the national, regional and international levels.

Forum attendees – including representatives of indigenous peoples' organizations around the world – hammered out regional action plans and a set of recommendations that will be presented next week to the 38th session of the Governing Council.

The recommendations build on the outcome of the first UN World Conference on Indigenous Peoples, held last September. Member States at the World Conference committed "to acknowledge, advance and adjudicate the rights of indigenous peoples pertaining to lands, territories and resources" – and "to develop policies, programmes and resources to support indigenous peoples' occupations, traditional subsistence activities, economies, livelihoods, food security and nutrition."

Free, prior and informed consent

The global meeting of the Forum called upon IFAD and governments to affirm these commitments through their actions in the context of rural and agricultural development. Speakers also stressed the need to incorporate indigenous peoples' rights and knowledge into the post-2015 sustainable development goals on poverty reduction, food security and climate change.

Mirna Cunningham, President of the Center for Indigenous Peoples' Autonomy and Development in Puerto Cabezas, Nicaragua, noted that indigenous communities are often located in remote areas with high poverty rates and little access to services. "We appreciate IFAD's efforts to reach out to these areas" through its grant- and loan-funded projects, she said. Still, Cunningham and others urged even greater participation by indigenous peoples throughout the project cycle.

Their views resonated with key findings from a report by IFAD's Independent Office of Evaluation, which were presented and discussed at the Forum. The report found that IFAD has made considerable progress globally in building partnerships with indigenous peoples and engaging with them on policy advocacy. It added that IFAD could strengthen its impact in the field through improved country programme strategy and project design, and the use of data and indicators that are more relevant to indigenous peoples.

More broadly, the Forum underscored the need for indigenous peoples' free, prior and informed consent whenever development projects affect their access to land and resources. IFAD President Kanayo F. Nwanzwe emphasized that such consent is required by the organization's Policy on Engagement with Indigenous Peoples. "IFAD takes the aspirations and rights of indigenous peoples very seriously," he said.

On the issue of food systems, Nwanze pointed out that indigenous peoples' lands are some of the most biologically and ecologically diverse places on earth. "It is only now, in the 21st century, that the rest of the world is starting to value the biodiversity that is a core value of indigenous societies," he added.

To prepare for the global meeting of the Forum, IFAD convened regional workshops in Africa, Asia and the Pacific, and Latin America in late 2014. The objectives of the workshops were to:

Participants in the workshops noted that indigenous peoples' livelihood practices – including small-scale farming, pastoralism, shifting cultivation, fishing, hunting, gathering and other forms of wild harvesting – provide for sustainable management of resources, biodiversity and ecosystems. They also stressed that such practices are closely linked with spirituality, culture and governance in indigenous peoples' lands and territories.

Despite their positive characteristics, however, traditional food systems are under pressure due to a range of factors, from non-recognition of indigenous land tenure to population growth, climate change, migration and conflict. Regional workshop participants highlighted the need for IFAD to take a holistic approach to strengthening indigenous peoples' food systems.

The results of the workshops were the basis for the regional action plans that working groups finalized during the Forum's meeting in Rome. In closing remarks at the meeting, IFAD Vice President Michel Mordasini highlighted several themes that all the regions appeared to have in common. "The most fundamental principles cut across ethnic and geographic boundaries," he said, "including the need to take a holistic approach to agricultural and rural development, to conserve biodiversity and to respect cultural values."

The second global meeting of the Indigenous Peoples' Forum at IFAD sets the stage for continued partnership in support of these fundamental principles. 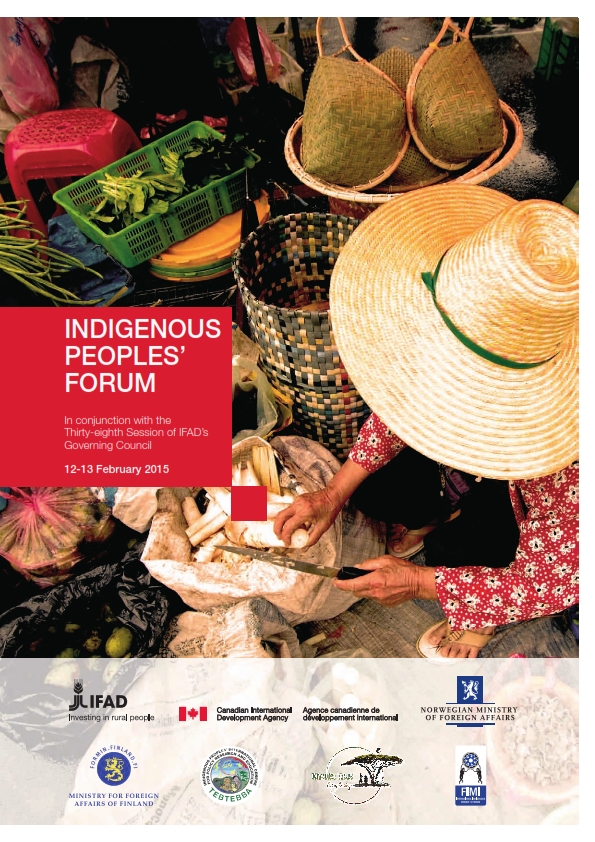