Every day Dienaba Sow travels 3.5 kilometres from her home in Hodio village towards Toung, in Senegal's Louga region, to collect water for her family's daily needs. She goes three times a day with her husband and brother-in-law on a donkey cart in the semi-arid climate of the Sahel. "It is very exhausting," she admits. In Toung, Dienaba often has to queue at the standpipe, where she takes around 1,000 litres of water to supply her household of 11 people, as well as her livestock of seven goats and two donkeys.

A large part of Dienaba's routine is just to collect water, which can take over ten hours per day. Lately she does not even notice her fatigue and is already celebrating an upcoming system intended to spread water access throughout Toung. Thanks to the IFAD-supported PAFA-E project, a water tower is under construction in the area, extending water distribution from Toung to satellite villages. Once it’s complete, Dienaba will be able to access water a kilometre from her home. "I will have a lot more time to spend with my family and my community," she says. 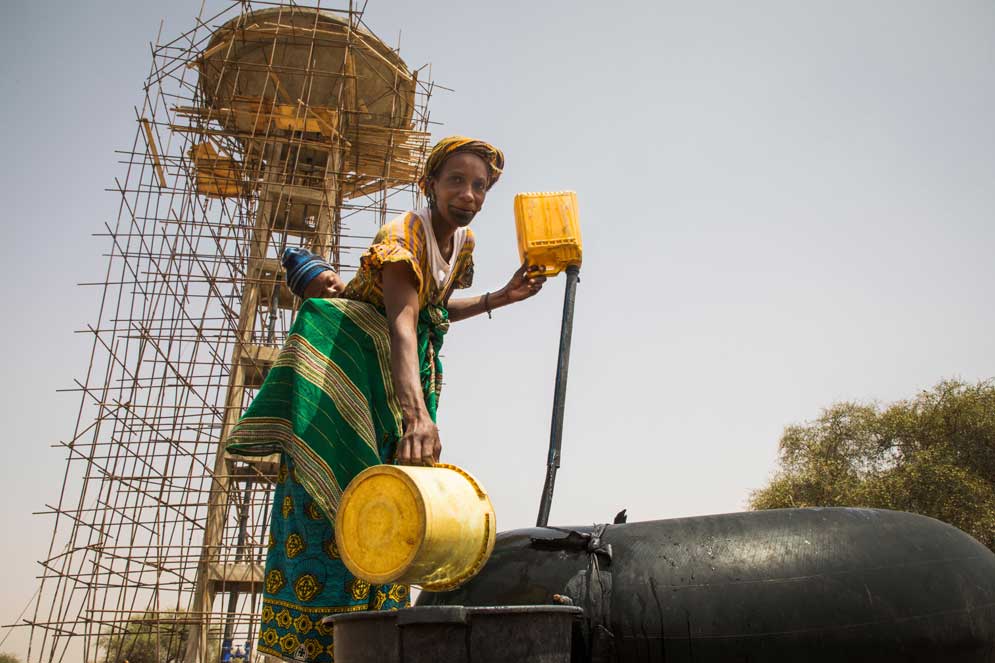 Travelling in search of water

In the Matam region, herdsmen and their families who once moved dozens of kilometres per day in search of water have seen a far-reaching transformation across the semi-arid lands of Senegal. Amid the sandy landscape of the Sahel, modern systems integrating boreholes, pipelines, reservoirs and towers have brought water to dry-climate villages marked by the typical bucolic architecture of mud-and-straw houses. These and other investments by IFAD and partners through the PADAER project have benefited nearly 7,400 people who can now rely on rely on accessible water and better cope with climate change effects in the Sahel zone.

The community of Loumbi Sanarabé whose livelihoods depend on animal husbandry has benefited from water systems built over the last few years. Before PADAER's intervention, families from Loumbi Sanarabé had to travel 24 kilometres to collect water. Now they have a standpipe in their own village. A watering trough has improved animal health, as the cattle can drink water more often. This has positive impacts on milk and meat production, increasing the market value of livestock and hence boosting the villagers' incomes. Both villagers and nomadic herders pay monthly amounts of CFA 200 (US$0.35) per head of large animals (cows) and CFA 50 (US$0.08) per head of small animals (such as goats) to use the trough. These revenues are used for maintenance of the infrastructure.

Beyond a water source, Loumbi Sanarabé has become a water supplier to other nearby villages. This has been made possible thanks to a 20-meter-high water tower, which benefits people from villages up to 12 kilometres away. The tower along with related structures have connected a group of villages through a system known as a Pastoral Unit (PU), which provides water services to inhabitants and passing-by migrants from Matam and Louga regions and neighbouring Mauritania. The PU of Loumbi Sanarabé covers 13 villages and is one of 28 being created or reinforced by IFAD's project across the region.

Communities are also increasingly starting related development initiatives. Thanks to increased access to water they have started vegetable gardens. The PUs have strong institutions that meet regularly and associate with neighbouring PUs. Members have established local management committees to oversee issues regarding major structures (water tower, borehole, trough) and at least six villagers per PU have been trained to operate drilling equipment. "These places have become well-structured centres where people have developed a sense of collectivism," says Abou Raby Ba, president of the Matam Federation of Pastoral Units.

The water systems in local PUs are helping villagers and nomads to adapt to increasingly widespread droughts in the Sahel. Building on IFAD's experiences in Senegal, through projects like PADAER and PAFA-E, relatively small investments in water infrastructure and capacity building have resulted in exponential benefits to rural people who are particularly vulnerable to climate change, expanding people's access to water and making development more sustainable.