Until COVID-19 hit in March, the G-Star Youth Group’s banana processing factory was buzzing with activity.

Weighing and washing fresh bananas, peeling and slicing them, arranging the slices in the solar dryers, milling dried bananas, packaging the flour, and finally marketing it – all of this activity had kept about 15 young men and women busy, and had offered them new prospects in life.

The venture had begun in February 2017, when the G-Star Youth Group saw a business opportunity in banana processing. They set up a factory in Kenya’s Nyeri county to produce fortified banana flour, a nutritious staple that can be used as a base for many other foods, including porridge, cakes and pancakes.

“We did not want to continue farming the way our parents did and inherit their very same problems. We needed to find an alternative for us, young people,” Charles Wachira Mwangi, the group’s chairperson, told us. 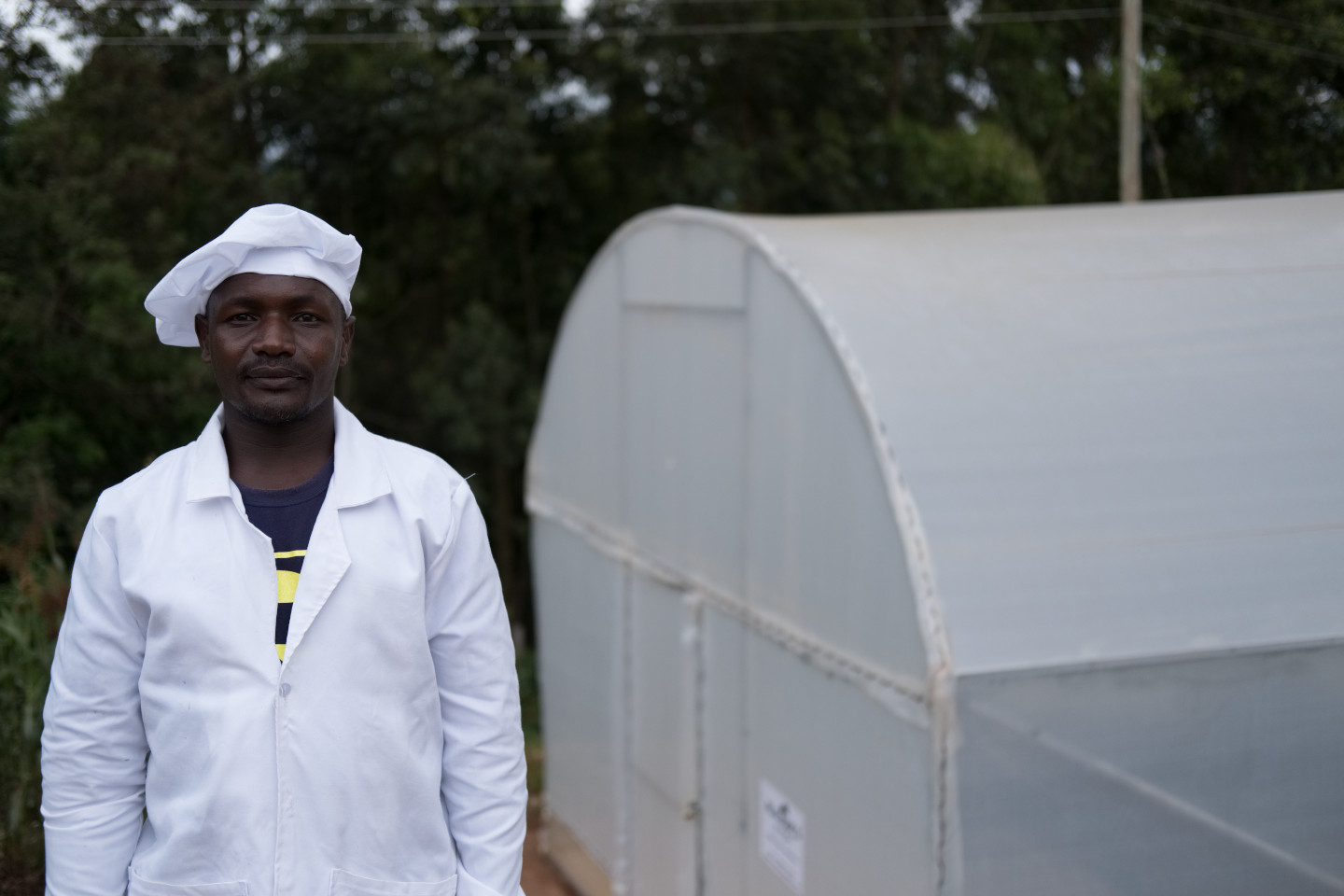 Charles pauses outside the processing plant’s greenhouse during our December 2019 visit. (©IFAD/Edward Echwalu)

When we spoke to the members of the G-Star Youth Group last December, they were full of optimism. With support from the IFAD-funded UTaNRMP project, they had bought a hammer mill, a banana slicer and a weighing machine; installed solar dryers and a 10,000-liter water tank; and constructed a small building to host the production unit on a quarter-acre of land allocated by the Nyeri county government.

Young people were not the only ones benefiting from the project. The group was buying bananas directly from local farmers and paying them double what they could expect to make from brokers.

“From the beginning, we wanted the project to benefit the wider community,” explained Charles.

“It means a lot to me,” added Jerioth Mugure Wachira, a 29-year-old graduate in information technology who joined the group in 2016. “My parents are selling bananas and now that they get cash they don’t need to borrow money when they have a problem.” 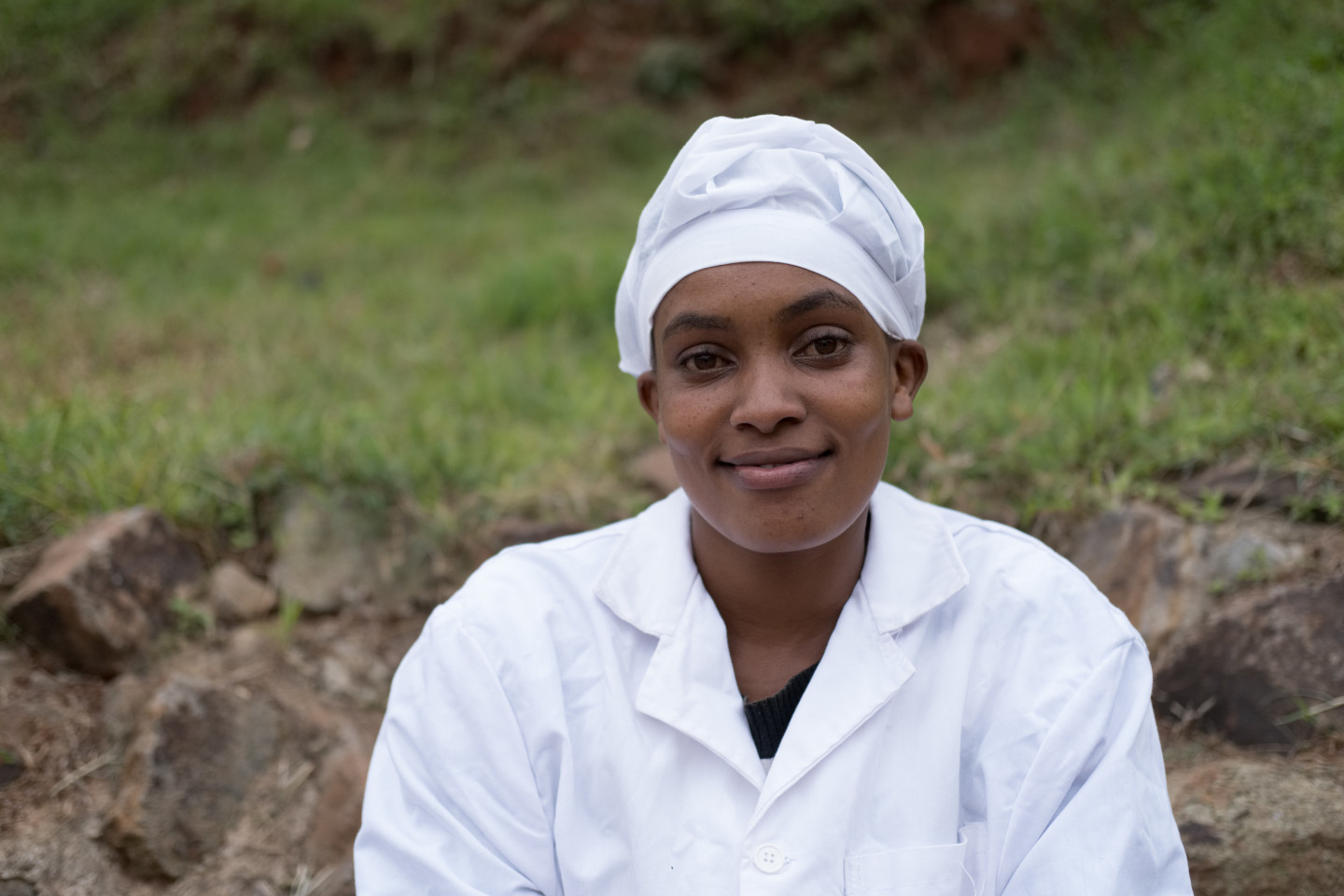 Portrait of Jerioth, one of the G-Star Youth Group members. (©IFAD/Edward Echwalu)

In its first year of existence, the plant produced 1,400 kg of fortified banana flour. Sales on the local markets generated about US$2,700. They re-invested most of the first year’s revenues into marketing and the installation of a second solar dryer to increase their production capacity.

The group had plans to hire someone with marketing skills to help their products reach a broader customer base and to help them develop new products like banana jam, juice and crisps. They were also in the process of acquiring an internationally recognized standard for quality certification that would help their products stand out.

But then COVID-19 struck.

When the Government of Kenya imposed movement restrictions in March, G-Star’s sales plummeted. Orders from distributors and retailers stalled, as did the exhibitions, a traditional venue for sales.

With low sales and low capital, the group was no longer able to purchase bananas from farmers – and consequently, their production ground to a halt.

After a couple of weeks of complete inactivity, the group members decided to look for ways to bounce back. They still had stock from January and February that was ready to sell – they just needed to find a way to reach their customers. Since the movement restrictions were still in place, they started to explore marketing and selling their products via digital platforms.

Today, the group uses Facebook and Twitter to advertise their products and generate sales. They’re also using WhatsApp to reach out to existing customers and maintain communication for potential orders. Many of their customers are understandably afraid to travel to pick up their orders, but G-Star has that covered, too: All products purchased through these platforms are sent to customers via the courier services provided by public transit systems (as is the custom in Kenya) or delivered right to their doorstep.

Members of the G-Star Youth Group package their product and prepare it for sale during our December 2019 visit. (©IFAD/Edward Echwalu)

“The total sales from these engagements may not be significant, but they are a start on the road to recovery,” Charles told us. “But importantly, we’ve realized the value of digital platforms and we will maintain our digital engagement post–COVID-19.”

If they’ve timed it right, they should run out of stock by the beginning of August – just in time to get back to the factory again, now that the government has lifted restrictions. They’re already making plans to come back safely, installing hand-washing stations and setting mask-wearing requirements. They also plan to control the timing of farmers’ deliveries to prevent crowding at the factory.

Like many, the G-Star Youth group faced an existential threat not just from the disease itself, but from its devastating social and economic impacts. Fortunately, thanks to their determination and a little ingenuity, there’s hope yet for them – and they plan to make the most of it.