One of the greatest difficulties facing poor fishing communities in Bangladesh is to obtain access and user rights to bodies of water. Until recently, water bodies were leased from the government by rich landowners who then hired fishers to work on them as labourers. IFAD has persuaded the government to lease bodies of water directly to fisher groups that can use their new-found security of tenure to develop such areas and maximize their fishing capacity.

Building on experience gained and lessons learned from the IFAD-funded Oxbow Lakes Small-Scale Fishermen Project, this eight-year IFAD-initiated project is working to improve the living standards and village-life conditions of fishing communities and women's groups in the project area, where 49 per cent of all households live below the absolute poverty line. The project focuses on two disadvantaged groups of rural poor people:

Specifically, the project works to boost fisheries and aquaculture production and incomes of people living in poverty. It establishes and strengthen community organizations to ensure that their members have access to bodies of water, and that technical and social services are provided on a sustainable basis. It improves women’s status by including them in the project’s main activity of pond aquaculture and by supporting them in other income-generating activities. The project upgrades the resource base through the rehabilitation of suitable large bodies of water and fish ponds. It facilitates access to and from rural communities by upgrading rural roads, thereby improving marketing possibilities for the inhabitants of the 450 project villages.

As a means of empowerment, the aquaculture project has reintroduced the concept of land owned by the community for the benefit of the community. By making it possible for fishers to organize themselves into groups, IFAD enables them to work and manage such waterways directly. 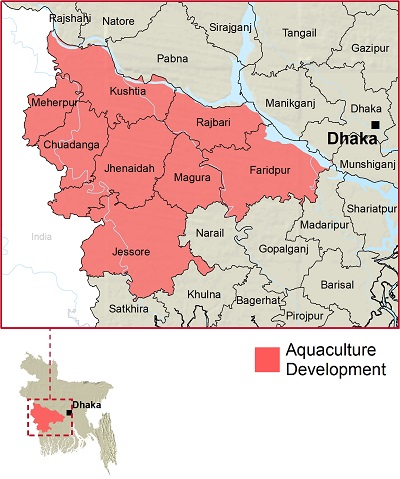 Bangladesh - Field study on Innovative forms of training and capacity-building

June 2011
This study was commissioned as part of IFAD’s Initiative for Mainstreaming Innovation (IMI) with the objective of learning lessons from IFAD experience in Bangladesh regarding training and capacity building, and so to improve the effectiveness of training for social development, capacity building, technology dissemination and innovation.