The objective of the programme is to raise the incomes of poor rural people in 50 communes in Ha Tinh province and 30 communes in Tra Vinh province by improving their access to labour, finance, commodities and service markets. Poverty rates are high in these communes, and the majority of the population lives in rural areas and depends on subsistence farming.

In Ha Tinh, because of the small size of the average landholding, agriculture remains at subsistence level and the poverty rate is about 40 per cent. In Tra Vinh, one of the poorest provinces in the Mekong Delta, landlessness is a serious problem and 33 per cent of households are poor. There has been a move to diversify and intensify through adoption of higher-value crops.

The programme will concentrate on:

It benefits poor people in the two provinces and provides an opportunity to introduce, develop and refine activities that will be relevant on a broader scale in other provinces and at national level. The programme will help raise incomes among poor people, including:

The programme targets groups of vulnerable poor people such as  households with underemployed members and limited landholdings, women and households headed by women, underemployed young people and ethnic minorities, including the Khmer in Tra Vinh. 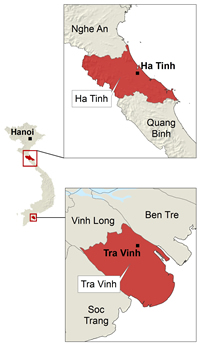