Pastoralists and agropastoralists make up nearly 15 per cent of Ethiopia's total population and are among the poorest and most vulnerable rural people in the country. This project is the second phase of a successful partnership between IFAD, Ethiopia's pastoral communities, local and federal governments, and the International Development Association. It builds on successes of the first phase to improve the livelihoods of about 600,000 pastoral and agropastoral households – about 25 per cent of Ethiopia's pastoralists.

In this second phase, the project increases its reach from 32 to 57 districts in the Afar, Oromia, Somali and Southern regions, where communities have high illiteracy rates, comparatively low school enrolment rates and very limited access to basic social services in health, sanitation, safe drinking water, transport and communications. 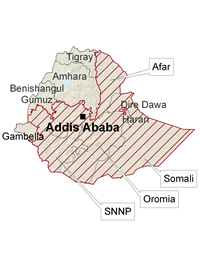