The Fisheries Development Project will operate along the coast of the Northern Red Sea and Southern Red Sea regions, located in arid and semi-arid lands; it responds to the Government of Eritrea's request to provide assistance for artisanal fishers in the Red Sea coastal regions, which suffered greatly during the border conflict of 1998-2000 and have yet to fully recover.
The project's main objective is to raise production and productivity in the fisheries sector while conserving fish stocks and the marine ecosystem. Furthermore, the project will:

The target group consists of poor artisanal fishers using boats and canoes, foot fishers, women, young people, returning internally displaced people and demobilized soldiers. The target group is located around Assab and Massawa and the 70 villages along the Red Sea coast. Particular attention will be paid to enabling woman-headed households (around 30 per cent of the population) to participate in the project and to supporting young people keen to undertake fishing but unable to purchase equipment. 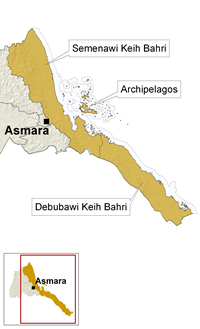