The project's overarching goal is to raise the quality of life for rural people, especially those living in the most disadvantaged areas. The development objective is to secure the sustained and lucrative economic participation of 73,800 ethnic minority and rural poor households living in Tuyen Quang, Gia Lai and Ninh Thuan provinces.

The Tam Nong Support Project will assist in establishing the policy framework and institutional arrangements and in developing the capacities and approaches necessary for the implementation of the Government of Viet Nam's new rural development policy, known as Tam Nong or Resolution 26 on Agriculture, Farmers and Rural Areas. 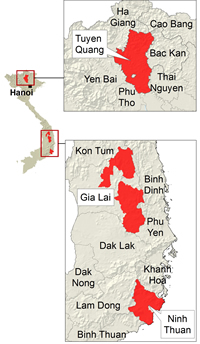 July 2019 - STORY
Climate change is one of the major dynamics of change affecting rural youth livelihoods. It is having significant effects on the countries in which the rural youth population is concentrated and on the sectors in which they will be looking for employment opportunities.