The Republic of Angola is sub-Saharan Africa’s second largest oil producer. Between 2014 and 2016, oil prices declined by over 72 per cent, prompting the government to accelerate efforts to diversify the economy. Agriculture is poised to become the main sector that will drive this diversification. Although the agriculture sector currently makes up only 5.5 per cent of Angola's GDP, the country is rich with resources, and 44 per cent of the employed population already works in this sector.

To scale up support for smallholder farmers and to build on the work of a previous project, the Government of Angola has partnered with IFAD and World Bank to create the SADCP-C&H-SAMAP. This project is designed to address two critical constraints on agricultural development in Angola: Firstly, it will increase institutional capacity, both nationally and in the project areas. Secondly, it will upgrade smallholder agricultural production and improve market linkages. It will tackle critical bottlenecks in the agricultural supply and value chains, including extension, irrigation, productivity enhancement, conservation agriculture and climate change adaptation, post-harvest management, and value addition.

SADCP-C&H-SAMAP will be implemented in the Cuanza Sul and Huila Provinces and aims to reach at least 235,000 farm families. Women will comprise at least 50 per cent of the participants, and youth 30 per cent. The core target group consists of 60,000 rural households, including 50,000 farmers who will benefit through farmers’ field schools (FFS) and 10,000 who will benefit from participation in FFS combined with investment support. About 1,000 farmers will also benefit from irrigation development. 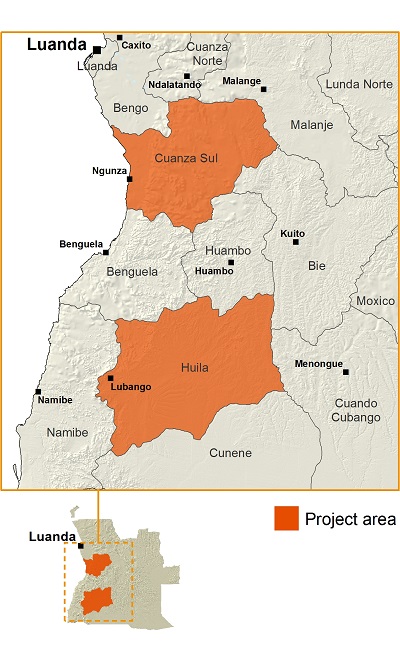