The project aims to improve the livelihoods of vulnerable rural people living in the southern part of Tunisia's Governorate of Siliana, particularly by creating new sustainable employment opportunities through value chain development as well as value addition through the profitable inclusion of organized smallholder producers, who will be trained to make effective and rational use of socio-economic potential within value chains.

Project activities are structured along two main components: value chain promotion and value addition, on the one hand, and the creation of favorable conditions for value chain development in an improved institutional environment, on the other hand. The project's approach is oriented towards promoting win-win partnerships between actors in the selected value chains and creating local economic development hubs. Such hubs are expected to retain a high share of added value at the territorial level by strengthening both upstream and downstream components of value chains.

The project involves 35 sectors across five delegations in the southern portion of Siliana, which is almost entirely composed of mountain systems. Out of almost 115,000 inhabitants in the targeted areas, 54,400 individuals from the most disadvantaged households are expected to directly benefit from the project. An additional 5,400 students from local primary schools are receiving nutritional education. 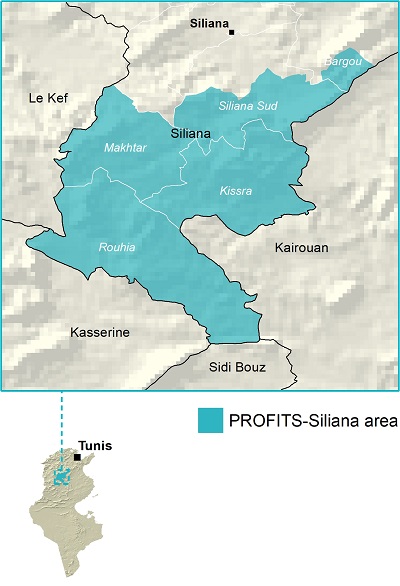