Promoting the Resilience of the Vulnerable through Access to Infrastructure, Improved Skills and Information (PROVATI³)

Promoting Resilience of Vulnerable through Access to Infrastructure, Improved Skills and Information

Improving the resilience of the population in a flood-prone and extremely poor area is the central theme. The increased resilience will result from better physical infrastructure, more diverse income streams for rural households and better decision-making based on sound flood information. The project also plans collaborate with other agencies, NGOs, microfinance institutions and the private sector.

PROVATI³ will be implemented in six districts and will cover 303,000 households (approximately 45 per cent of the total population), though the proposed infrastructure improvements and flood information system are expected to benefit the general population of the project areas. 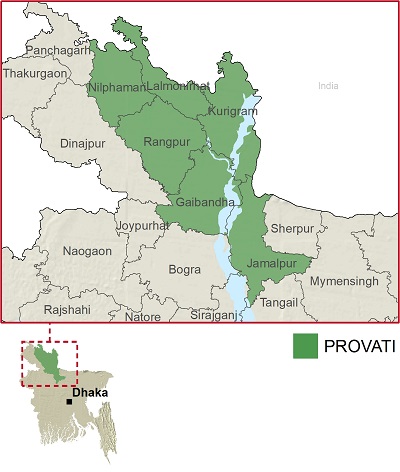