Madagascar's economy is primarily based on agriculture as 64.9 per cent of the population live in rural areas. Following a series of political crises that weakened its institutions, discouraged investment and seriously eroded living conditions and infrastructure. Poverty has worsened, particularly in rural areas where poverty rate stands at 82.2 per cent. It is estimated that 76 per cent of the population fall below the minimum food energy availability threshold. The prevalence of chronic malnutrition among children under five years of age is among the highest in the world. The underperformance of agriculture sector is one of the main causes of poverty in Madagascar.

DEFIS will apply solutions tried and tested by IFAD’s Madagascar country programme and scale them up in the southern half of the Big Island. With the normalization of political and social conditions, the programme’s investments will help strengthen and secure the production base of family farms in a context of climate change. It will connect them to production and marketing support services in order to sustainably transform the agriculture sector and the country’s rural economy.

DEFIS will operate in eight regions in southern and centre-eastern Madagascar. The direct beneficiaries of DEFIS investments and services will be 320,000 family farms, at least 30 per cent of them headed by women or young people. Eight value chains – rice, maize, cassava, groundnut, coffee, onion, small ruminants and honey – have been selected, three in each region. In addition, support will be provided for value chains of special interest, such as sorghum and millet, that can build the resilience of production systems for family farms in semiarid zones. 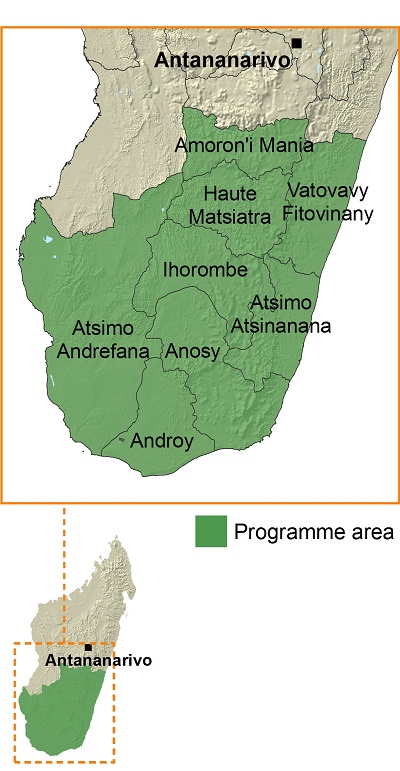