Project to Revitalize Crop and Livestock Production in the Savannah (PREPAS)

Project to Revitalize Crop and Livestock Production in the Savannah

In addition to the effects of these conflicts, the main causes of poverty include the underperforming agropastoral sector; the lack of roads, infrastructure and public services in rural areas; vulnerability to climate change, floods and droughts; as well as scarce economic opportunities, especially for young people.

The Project to Revitalize Crop and Livestock Production in the Savannah (PREPAS) will target 30,000 vulnerable households of agricultural producers in the subprefectures of Baoro, Bossemptélé, Bouar and Yaloké, with possible expansion to Bozoum after the project’s midterm review. At least 50 per cent of the participants will be women, 30 per cent young people and 10 per cent heads of the most vulnerable households.

The project aims to strengthen the production, processing and marketing of maize, cassava, groundnut, red beans, poultry, goats, sheep and pigs. It will promote sustainable practices that help famers adapt to climate change, particularly to droughts and floods. Household members will receive training in good dietary practices, nutrition and hygiene. The availability of highly nutritious foods will be increased. In an effort to reduce tensions and promote long-term sustainability, the project will also focus on encouraging dialogue between livestock producers and farmers growing crops.

In addition, the project will establish 800 agricultural, agropastoral and market-gardening groups while developing market gardens equipped with solar-powered irrigation devices. Furthermore, 12 product warehouses and 8 input storehouses will be constructed, and 450 young people will receive training in processing, marketing or services within the value chains of selected crops and livestock. 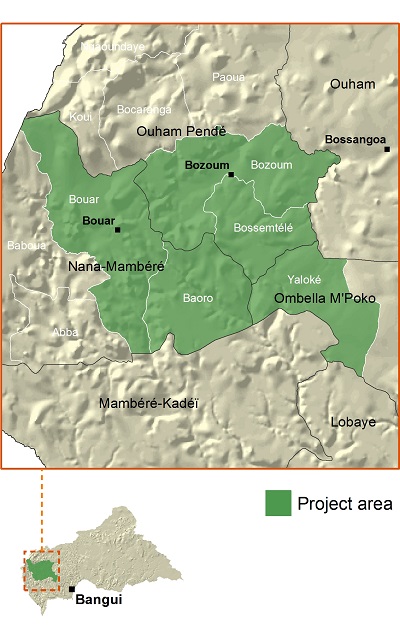