A total of 108,750 poor rural households in four regions of Ethiopia are expected to benefit from the second phase of a programme designed to reduce the impact of climate change, enhance economic growth and reduce rural poverty.

Based on the success of the first phase of the programme, completed in 2015, including improvements in the living conditions of smallholder farmers, best practices will be scaled up during the second phase.

PASIDP II envisages the development of about 18,400 hectares of small-scale irrigation schemes in four regions: Amhara, Oromia, Tigray and the Southern Nations, Nationalities and People's Region. Particular attention will be given to women, young people and vulnerable groups. In addition to increasing agricultural productivity, incomes and resilience of ecosystems and the rural population, the programme is expected to create 15,000 new jobs.

PASIDP II will improve the access of farmers to a secure irrigation production system and enhance water efficiency through climate-smart agriculture in the adjacent watersheds. In addition, the programme will support linkages to markets and services so that smallholder farmers can increase their productivity, competitiveness and incomes. It will also enhance their resilience against external shocks and those induced by adverse weather and climate conditions, such as drought. The programme thus aims to improve farmers' prosperity, food security and nutrition.

In addition, PASIDP II will also train participants to take charge of the development process and encourage women to join the decision-making bodies of water users' associations. 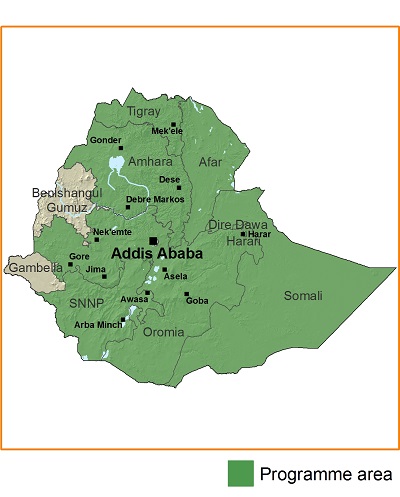 2019-Ministry of Finance and Economic Development-AUDIT_REPORT