2016 Annual Report on Results And Impact of IFAD operations - IOE

2016 Annual Report on Results And Impact of IFAD operations

The 2016 Annual Report on Results and Impact of IFAD Operations (ARRI) draws from 40 independent, impartial and rigorous evaluations carried out in 2015. This year’s report assesses results against the Ninth Replenishment of IFAD’s Resources (IFAD9). It also identifies opportunities and challenges in light of the priorities for the Tenth Replenishment of IFAD’s Resources (IFAD10) and in the broader context of the Sustainable Development Goals and the 2030 Agenda for Sustainable Development.

The broad picture of performance in the IFAD9 period emerging from the 2016 ARRI is positive. The 2015 evaluations found that overall 80 per cent of the projects are rated moderately satisfactory or better for most of the criteria in 2013-2015.

IFAD has made a positive contribution to rural poverty reduction, for which the percentage of moderately satisfactory or better projects increased from 87 per cent for operations completed in 2011-2013 to 92.3 per cent in 2012-2014.

This is mainly a result of the Fund’s attention to improving income and assets, supporting human and social capital empowerment, enhancing agricultural productivity and food security and boosting technological innovation and scaling up.

In particular, IFAD operations completed in 2012-2014 achieved the highest impact on household income and assets, as compared to other impact domains, with 92.3 per cent of the projects rated moderately satisfactory or better. The contribution of IFAD’s operations to food security and agricultural productivity, which is the keystone of the Fund’s mandate, has been substantive in terms of both improving the availability of and access to food, and enhancing agricultural productivity. Eighty-six per cent of projects are assessed as moderately satisfactory or better in 2012-2014, which is the highest percentage since 2007.

Moving beyond the project level, the assessment of non-lending activities (e.g. knowledge management, partnership-building and policy dialogue) in the 2015 Country Strategy and Programme Evaluations show an improvement of performance in knowledge management from 67 per cent moderately satisfactory country programmes since 2010-2012 to 78 per cent in 2013-2015. This confirms the increased attention of the Fund to sharing experiences and lessons learned.

Notwithstanding the mentioned positive findings, the 2016 ARRI highlights that IFAD’s performance is largely only moderately satisfactory and identifies systemic issues at both project and country levels that merit further attention moving forward to achieve satisfactory and highly satisfactory results:

Weak targeting strategies, which are often not flexible enough to adapt to changing contexts, and poverty analyses that do not sufficiently capture the differences among groups of rural poor, limit the reach of project activities to all targeted beneficiaries, in particular the poorest.

Poor nutrition mainstreaming in IFAD’s portfolio and the lack of evidence of the potential contributions of improved agricultural productivity to food security and nutrition hinder increased impact in rural poverty reduction.

Inadequate management of fiduciary responsibilities which constrains efficiency of operations and better performance of governments.

Non-lending activities have historically been the weakest area of IFAD support with 64 per cent of the country programmes rated only moderately satisfactory since 2006. The 2015 Country Programme Evaluations found that while performance in knowledge management is improving, policy dialogue and partnership-building at country level show a decline in performance. Partnerships remain bound to the project level, thus limiting dialogue, dissemination of results and scaling up of successful approaches.

Each year since 2007, the ARRI has focused on a learning theme. The topics for the learning themes are agreed with the IFAD Executive Board, with the aim of deepening the analysis on selected issues that merit additional reflection and debate in order to enhance the performance of IFAD operations. The learning theme presented in this year’s ARRI is knowledge management, with an emphasis on how operations can learn to improve performance.The report highlighted that notwithstanding the improvements in performance in knowledge management, the limited allocation of resources, time and incentives restrain the systematization of knowledge management in IFAD and the establishment of stronger learning loops among the project, country and institutional levels. By and large, the knowledge acquired during project implementation is often not systematically captured and widely shared. 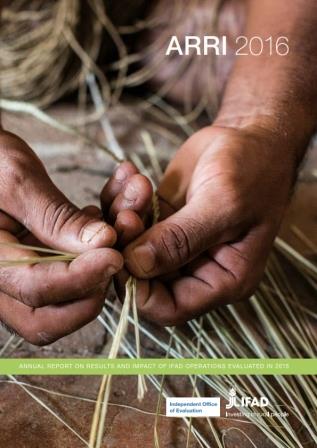