Annual Report on the Results and Impact 2011 - IOE

Annual Report on the Results and Impact 2011

This is the ninth Annual Report on Results and Impact of IFAD Operations (ARRI) produced by the Independent Office of Evaluation of IFAD (IOE). It consolidates and synthesizes the results and impact of IFAD-funded operations, using as its basis independent evaluations conducted by IOE, and it raises issues and highlights lessons learned that can contribute to improving IFAD’s development effectiveness. This ARRI draws on a larger number of project evaluations and country programme evaluations than any other edition has thus far.

The performance of IFAD-supported projects continues to be satisfactory in the areas of relevance, effectiveness, rural poverty impact, innovation, and gender equality and women’s empowerment. IFAD’s own performance as a partner has improved in the past years as well, in large part because of its progressive transition to direct supervision and implementation support, the expansion of its country presence, and more systematic portfolio management. One qualification, however, is that moderately satisfactory performance remains the norm. There is therefore still scope for further improvement.

The benchmarking analysis conducted in the context of the ARRI concludes that the performance of IFAD-supported projects is on the whole slightly better than the  agriculture sector operations funded by the African Development Bank, the Asian Development Bank

and the World Bank. In terms of benchmarking performance across the five geographic regions, IFAD operations in the West and Central Africa region remain most challenging compared to other regions. 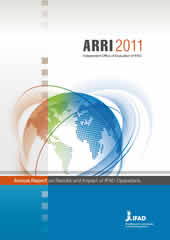