Cancun, 9 December, 2010 –  Despite improvements over the past 10 years, global poverty remains a massive and predominantly rural phenomenon – with 70 per cent of the developing world's 1.4 billion extremely poor people living in rural areas – according to a report released today by the International Fund for Agricultural Development (IFAD).

The Fund's Rural Poverty Report 2011 says that a range of natural resource constraints and uncertainties, reflected in increasingly volatile food prices and aggravated by the effects of climate change, will complicate further efforts to reduce rural poverty.

But the report also emphasizes that profound changes in agricultural markets are giving rise to new and promising opportunities for the developing world's smallholder farmers to significantly boost their productivity, which will be necessary to ensure enough food for an increasingly urbanized global population estimated to reach at least 9 billion by 2050.

Accordingly, "there remains an urgent need…to invest more and better in agriculture and rural areas" based on "a new approach to smallholder agriculture that is both market-oriented and sustainable," the report says. 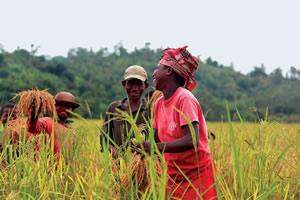 The Climate Change Challenge
Climate change directly affects both the earning capacity and food security of the poorest through its impacts on agriculture.  By exacerbating the threats of weather-related disasters, drought, biodiversity loss, and land and water scarcity, climate change is increasing uncertainty and degrading the natural asset base of poor smallholder farmers, making it more difficult for them to escape and remain out of poverty.

"Poor women and men in rural areas are often working some of the most climatically vulnerable land on our planet and through their ingenuity, local knowledge and sweat are feeding one-third of humanity," said Dr. Hussien A. Al-Gunied, Deputy Minister for Environmental Affairs, Yemen, "if agriculture is not brought to the forefront of climate negotiations, these people will pay the price."

Smallholders are central to feeding the world now, and in the decades to come - with 500 million farms of less than 2 hectares in size worldwide, they are stewards of a large share of the world's natural environment.  Smallholders farm 80 per cent of the farmland in Africa and Asia .  To play a greater role to feed more than 9 billion people by 2050 IFAD is working with them to expand their production sustainably and tap into national and international markets.

Climate change provides both the imperative and the opportunity to embark on a sustainable green revolution that includes and empowers smallholders.

The report assesses recent experience in sustainable food production, arguing that there is major potential to scale up sustainable intensification practices in agriculture.  Ecosystem-based approaches that improve soil carbon and hence water retaining capacity and fertility, that use a combination of organic, biological and mineral resources, and that harvest and use water more efficiently have been demonstrated to reduce poverty, strengthen food security, increase climate resilience and reduce emissions. These approaches embrace sustainable land management, agroforestry, conservation agriculture, integrated pest management and payments for environmental services.  While not yet practiced universally, many developing countries are putting in place policies to scale them up.

The report makes clear that rural poverty continues to be a massive phenomenon throughout much of the developing world, and that it is particularly acute in Sub-Saharan Africa and South Asia . It also points to the key role of women farmers, who produce most of the food that is consumed locally in rural areas, and the need to address their inadequate access to land tenure, credit, equipment and market opportunities.

Yet the report also indicates that momentous ongoing changes in agricultural markets, as well as emerging opportunities in the rural non-farm economy, offer new hope that major progress can be made in combating rural poverty.  These include the rapid growth of urban centres and the accompanying rise in demand for higher value food, as well as the fact that agricultural markets are growing and becoming better organized in order to meet that demand.

What needs to be done?

"Our aim is the development of smallholder farming systems that are productive, integrated into markets, environmentally sustainable and resilient to climate change.  We must also encourage more opportunities for growth in the rural non-farm economy," continued IFAD's Dr. Cooke, "Essential to that is improving the overall environment in rural areas, particularly by supporting their infrastructure and key services such as rural finance, health care, education and communications. Secondly, we need to focus on reducing the level of risk – further aggravated by a changing climate - that poor rural women and men face.  By doing this we can make it more likely that poor rural people will themselves make the investments necessary to become more productive as farmers and as businesspeople. Thirdly, there needs to be more support to advancing the individual capabilities of rural people.  Finally, we need to strengthen their collective capabilities to manage risks and assets, to learn new techniques and skills and to market their produce.

The Rural Poverty Report 2011 was made possible with funding from the Governments of Italy , the Netherlands , Sweden and Switzerland , and the Arab Center for the Studies of Arid Zones and Dry Lands.

For more information on the Rural Poverty Report 2011, access to videos, photo essays, testimonials, and to download a copy of the Report, go to www.ifad.org/RPR2011.

A video news release on the Rural Poverty Report 2011 can be found at ftp://ftpserver.unicc.org/ifad/RPR2011VNR/.

For more News about the Rural Poverty Report 2011, follow us on our social media channels:

On 6 December from 9:30 to11:30 GMT the IFAD social reporting team will report live from the Rural Poverty Report launch at Chatham House in London .

On 17 December from 9:00-11:00 GMT the IFAD social reporting team will report live from the Discussion Forum held in Rome.

Check out the IFAD social reporting blog at http://ifad-un.blogspot.com/search/label/rpr2011

The International Fund for Agricultural Development (IFAD) works with poor rural people to enable them to grow and sell more food, increase their incomes and determine the direction of their own lives. Since 1978, IFAD has invested over US$12 billion in grants and low-interest loans to developing countries, empowering more than 360 million people to break out of poverty. IFAD is an international financial institution and a specialized UN agency based in Rome – the UN's food and agricultural hub. It is a unique partnership of 165 members from the Organization of the Petroleum Exporting Countries (OPEC), other developing countries and the Organisation for Economic Co-operation and Development (OECD).