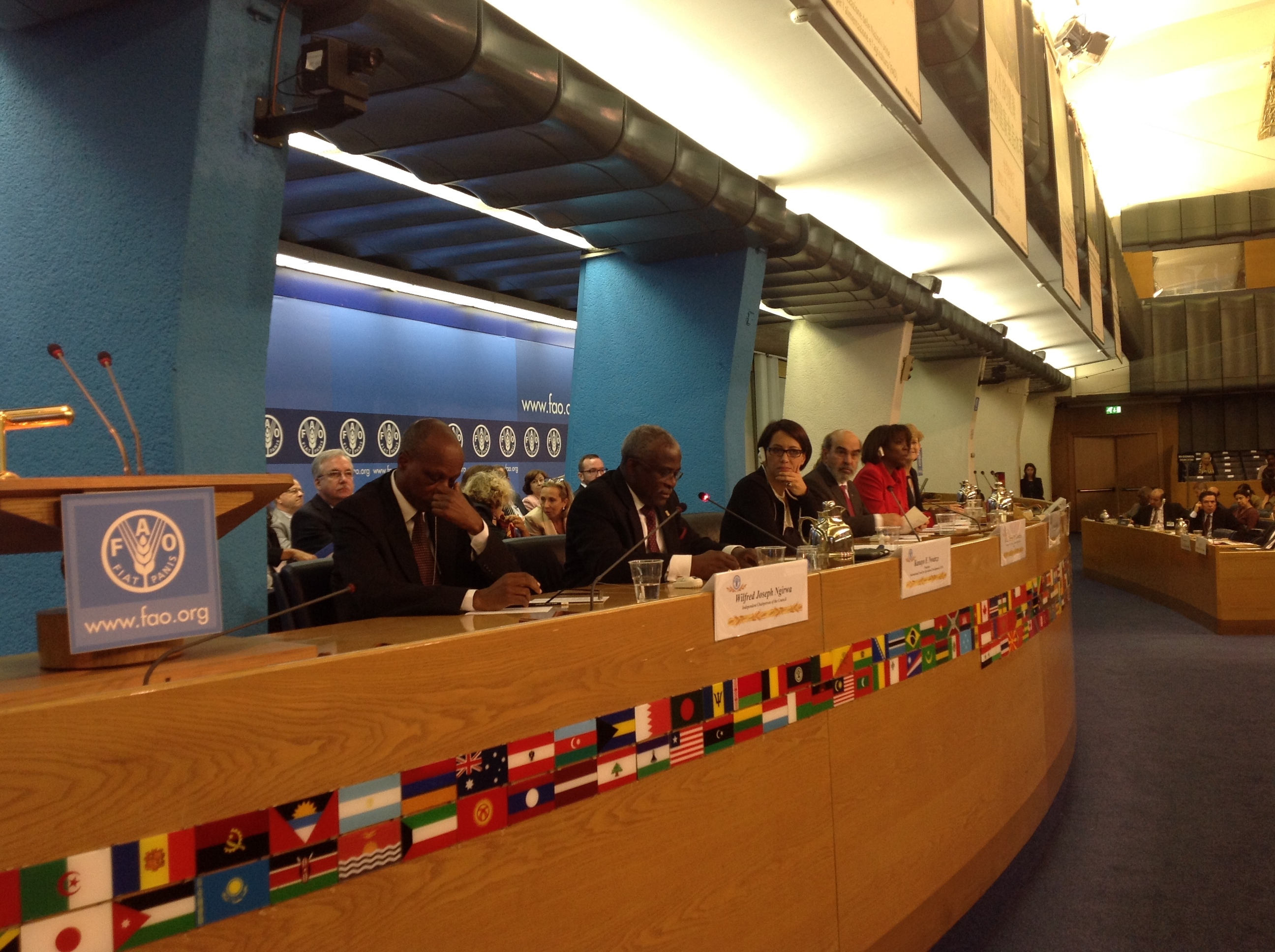 Today, on World Food Day, I am not going to talk to you about climate change, although our topic is sustainable food systems.

Neither am I going to talk to you about the financial environment, although it has an important relationship to food security.

Nor am I going to talk to you about the 842 million men women and children who go to bed hungry every night, appalling as that statistic is.

You already know about the human suffering caused by poverty and hunger, and the role played by climate change and unstable economies.
Today, what I want to talk to you about is not what is wrong, but about the steps we must take to set it right. I want to talk about three elements that are preconditions for sustainability. Three things that need to change because, without them, all of our well-meant efforts will not be generating the lasting benefits that 842 million people need.

The first thing that must change is government policy.  It is time for governments to go beyond words to action. Every country needs policies for inclusive growth to maximize its food production potential, and in many countries that means supporting smallholder-led agriculture.

This includes policies that offer incentives for investment in agriculture and reduce the risks for farmers and private sector partners alike. Policies that encourage inclusive business models. Policies that facilitate the ability of poor farmers to access finance and technology and to have rights to water and land.

We are starting to see progress, with national policies being tailored to local needs. In Burundi, for example, IFAD supported CAADP in lobbying for policy changes. As a result, the government has introduced fertilizer subsidies and increased the share of the budget to agriculture from 3.6 per cent in 2010 to 10 per cent in 2012; or in Panama, where an IFAD-supported project provided economic and logistic support for negotiating laws for indigenous peoples' land rights.

And there are also encouraging developments with Ethiopia's Agricultural Transformation Agency, Tanzania's Growth Corridor. And, of course, my own country, Nigeria, which has made agriculture a top priority of its Transformation Agenda.

Now to the second element – of effective institutions – because policies are only worth the paper they are written on if they are supported by strong institutions. We have seen the power of institutions to transform agriculture and economies in Brazil, where EMBRAPA, working jointly with other  national and state level institutions, has contributed to an enormous transformation in just 30 years. Today, Brazil is no longer a food importer and becoming one of the biggest producers and exporters in the world.

The third essential element for sustainable food systems is infrastructure, from production to processing plants, warehouses, roads and ports.

Today, more than one third of the rural population of sub-Saharan Africa lives five hours from the nearest market town of 5,000 people, making transport and marking costs too high. Across the continent, badly maintained roads are the norm.

Equally important are processing and storage facilities. An estimated 20 to 40 per cent of crop production is lost in sub-Saharan Africa because of deterioration after harvest. Post-harvest losses on this scale are scandalous, particularly on a continent where millions of people go hungry.

We know that smallholders can contribute to sustainable food systems if they have well-functioning infrastructure, supportive policies and institutions. We have seen it in Brazil, China, Malaysia, and Viet Nam.

But let us also call on every government to do its part.

As I have said before, I will say again today:  No amount of sunlight or rainfall will allow a plant to grow and flourish unless it is first fully rooted in its own soil.

Growth and development are intrinsic processes and they must first be nurtured and cultivated from within. Only then can external forces add value to the process.