Sowing the seeds of progress – one woman’s story

Sowing the seeds of progress – one woman’s story 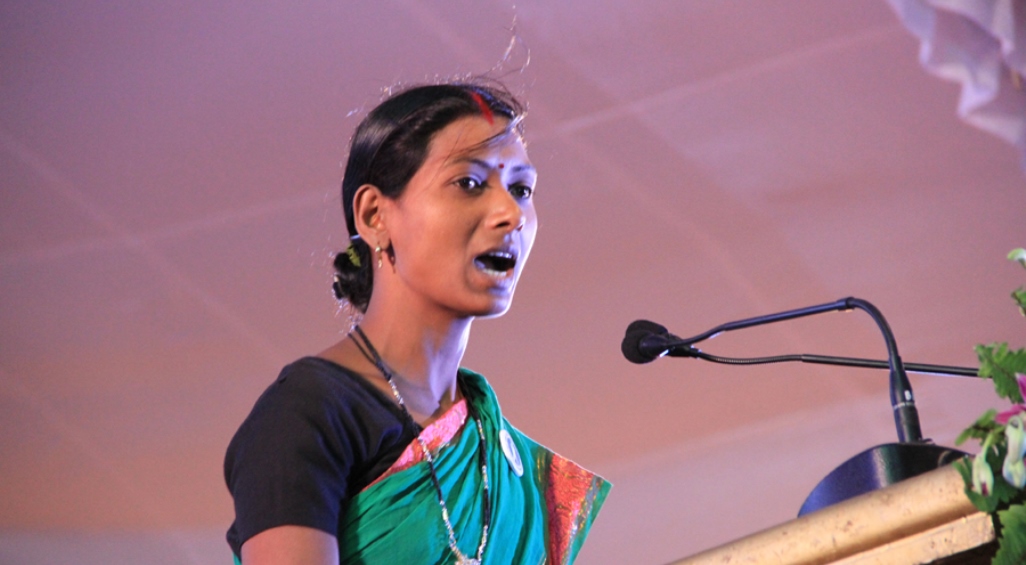 30 March 2017 – Rekha Pandram, 34, is a Gond woman who has transformed the lives of more than 7,500 women and their families across 40 villages in the Dindori district of Madhya Pradesh, India.

Born into a poor family in the village of Amdari, Pandram was forced to leave school after only eight years and work as an agricultural labourer to support her family. Like many village women, she had very little say in the decisions made by her family despite contributing to the household income.

Although she was married at 19 and expected to adopt the role of housewife, Pandram remained motivated to learn, grow and lead.

In 2008 she became a member of one of the self-help groups set up through the IFAD-supported Tejaswini Rural Women Empowerment Programme, in the village of Phulwahi.

The programme is designed to empower rural woman so that they can take advantage of economic and social opportunities. Self-help groups such as the one Pandram joined also give women a chance to be involved in decision-making processes – often for the first time – and allow them to gain control over their lives.

Pandram’s determination to make a difference was recognized early on. With encouragement and technical training she advanced as a member of the village level committee and was selected to represent her self-help group and village at the federation level, eventually becoming the secretary of the Nari Chetana Mahila Sangh, a federation of women’s self-help groups formed under the IFAD-supported Tejaswini programme. At the same time Pandram found time to study and passed her high-school exam and now she is planning to take her higher secondary certificate exam.

In line with the objectives of the IFAD-supported programme, Pandram’s federation began work with 1,500 women in 40 villages teaching them to cultivate and market minor millets – Kodo and Kutki. In 2013, the women all agreed to sow minor millets on 0.5 acres of their land.

Minor millets are traditional crops that are being promoted by the programme. In India, as in other countries, wheat had been used to replace local crops, but the millets are hardier than wheat, coping better with water scarcity and rocky land.

The Federation later extended its work to include de-husking the millets, and this has become one of the most successful enterprises in the Dindori district to date. The women taking part in this initiative are now earning good incomes. But most importantly, they and their families are eating well because the millets are highly nutritious.

However, Pandram’s work did not stop there. Many of the villagers living in the tribal-dominated Dindori district live in impoverished conditions with marginal land holdings and underutilized resources.

Her aim was not only to ensure economic well-being, but also to further improve the nutrition of participating households. By following her lead in sowing seven different green vegetables in plots of land behind their houses, more than 3,000 women were able to harvest fresh green-leafed vegetables from their plots to use for meals on a daily basis. As a result of her "seven-days-seven-vegetables" initiative, the nutritional status of the women and their families started to improve.

To share her experience and knowledge, Pandram attended the Commission on the Status of Women in New York in March 2017 and spoke  at the IFAD side event “Empowering rural women to develop resilient, sustainable livelihoods and communities”.

She recounted the federation’s success with the minor millets. “Previously we were only getting 12 rupees per kilo of minor millets, 15 for other types of millet,” she said.

“But now with the support of the Madhya Pradesh government and IFAD, we have established a processing unit in the village, and started processing minor millets and packaging them. We are now getting up to 80-90 rupees per kilo. We have given our name to this product and it has our brand.”