Reducing rural poverty and promoting sustainable market-led growth are the overall goals of this programme. Families that have been displaced by armed conflict or have now resettled their original villages are its primary target.

Cibitoke province was selected for its traditional role as the country’s breadbasket.The province is strategically located at the border with Rwanda and the Democratic Republic of Congo, and its infrastructure has been damaged by repeated incursions of armed groups. The other provinces were included in the programme because they either lacked infrastructure or it had been destroyed, and because of their isolation (as in Karuzi province) and the need to return to stability.

The programme’s specific objectives are to increase the productive capacity of poor farming communities, improve food security for households, and promote community-driven development while protecting the environment.

For the first time at national level, the programme introduces several innovative features. Promotion of women’s empowerment and the systematic use of community development technologies are a priority. Activities focus on technological innovation and biological soil conservation methods. About 2,000 ha of marshlands–more than the original target–have already been rehabilitated to be used for intensive farming. Production of major food crops (maize, beans, peas, rice and potatoes) is expected to be more than doubled. Major cash crops (cotton, coffee and tea) have also received support from the programme. 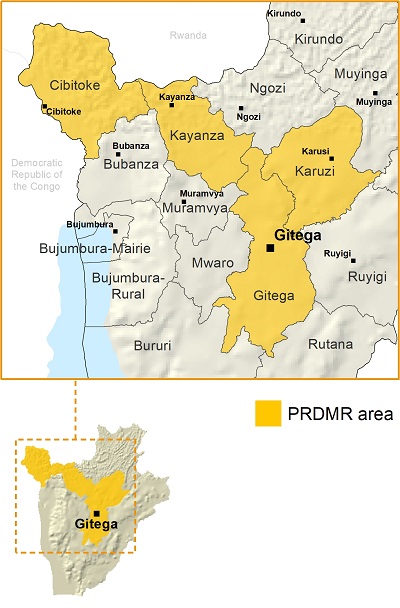