In December 2011, the Executive Board requested the Independent Office of Evaluation of IFAD to prepare a synthesis report on the experience gained in results-based country strategic opportunities programmes (RB-COSOPs) – introduced in 2006. The synthesis sought to evaluate whether RB-COSOPs are serving as instruments for:

COSOPs approved prior to 2006 were largely viewed as internal documents for identifying investment opportunities and pipeline projects, rather than as a tool for strategic, dynamic management of IFAD-supported programmes. They were prepared with limited participation by and input from in-country partners. In contrast, the RB-COSOP emphasizes: alignment with national priorities; joint IFAD and country ownership; synergies between lending and non-lending instruments; results and performance management; learning and accountability; partnership-building and harmonization; and innovations and scaling up. This approach seeks a sharper focus on rural poverty, with more-effective targeting of the poorest people in rural areas. At the time of writing, 50 RB-COSOPs have been approved.

The most recent country programme evaluations (CPEs) have observed that in terms of relevance, RB-COSOPs have generally been aligned with IFAD's and the partner country's strategic objectives. Nevertheless, there are some areas not sufficiently addressed, such as engagement with the private sector, smallholder agriculture, indigenous peoples' issues, and approaches towards scaling up. Overall, RB-COSOP effectiveness, which determines the extent to which the strategic objectives were or are likely to be achieved, is rated well.
CPEs have noted an improvement in overall portfolio performance, which also includes an assessment of rural poverty impact, sustainability, innovation and scaling up. However, it is still too early to assess whether the projects included in RB-COSOPs are implemented significantly better than earlier projects, because they are ongoing and have not yet been evaluated.

Other findings by CPEs indicate scope for improving synergies between different instruments (loans and grants, including other non-lending activities). However, there are a number of limitations that constrain the performance of non-lending activities: insufficient budgetary allocations, if any; limited incentive structure; insufficient in-country human resources; limited grant resources and cumbersome access procedures; and insufficient integration of these activities into overall country programmes.

In general, the importance and utility of the RB-COSOP is widely acknowledged within IFAD as a strategic document that helps guide IFAD's country engagement in line with national priorities, and promotes mutual ownership and accountability. Concerns and uncertainties remain regarding when an RB-COSOP should be undertaken and whether the COSOP cycle (five years) should be aligned with the performance-based allocation system cycle (three years at present). No RB-COSOPs provide an indication of the budget required for their delivery and attainment of their strategic objectives.

With increasing demands for better analytical inputs in COSOP formulation, especially in regard to conducting thorough background studies and analysis of institutional architecture at the country level, concerns remain as to how this can be achieved given the rather meagre resources allocated for COSOP preparation.

While most country programme managers (CPMs) have found the guidelines useful, the review process has proven cumbersome and time-consuming; it has not facilitated an effective dialogue with recipient governments and quite often has not provided significant value added. CPMs are often obliged to spend considerable time responding to the issues raised, sometimes in repeated back-and-forth exchanges. The underlying grievance is that greater importance is given to the views of external reviewers than to those of the CPM accountable for the entire RB-COSOP process. It is felt that it might be necessary to ‘front-load' the review process to avoid diplomatic tangles with the government or contradicting the ownership principle.

A key distinguishing feature of the RB-COSOP is the inclusion of a results management framework (RMF) to track the performance and impact of IFAD's contribution and to promote accountability. While reporting of results and outcomes has improved over the years, significant challenges at project and country programme levels do remain: choosing appropriate indicators that capture outcomes and impacts; linking project goals and outcomes with country-level strategic goals and outcomes; determining realistic goals and expected outcomes; and formulating dedicated composite indicators and targets that measure government performance. Another area of concern continues to be the lack of integration of outputs from IFAD‘s monitoring and evaluation (M&E) systems into national M&E systems.

As in IFAD, all other international financial institutions (IFIs) have evolved their country strategy processes, mainly led by their country offices, with the intention of incorporating the principles of ownership included in the Paris Declaration on Aid Effectiveness, and in particular the principle of measuring results. While IFI country strategies also include an RMF, unique IFAD features are the inclusion of the agreement at completion point whenever a CPE has preceded formulation of the RB-COSOP and of the RMF of the last country strategy.

Compared with IFAD, the most obvious difference lies in the multisectoral dimension of other IFIs. This element adds complexity to the preparation of country strategies. A common feature among all other IFIs is the full involvement of their staff in the entire process, while the use of external consultants is considered an exception. In terms of resources devoted to country strategy preparation, all other IFIs allocate greater resources than IFAD – estimates range from US$250,000 to US$500,000. The contents of strategy documents reflect more similarities than differences. Compared with IFAD COSOPs, there is more attention to the identification of risks and mitigation measures.

Overall, a survey of the evidence available would support the following observations: 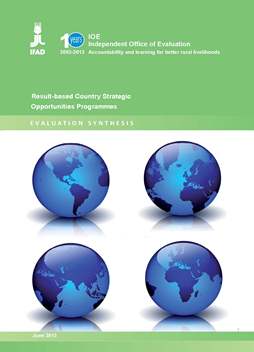