Cooperatives are not the only farmers' organizations (FOs) to receive IFAD support. However, because the United Nations has designated 2012 as the International Year of Cooperatives (IYC), it was considered appropriate that the synthesis report should focus mainly on cooperatives. Other forms of FOs are also discussed, not only owing to their importance but also because IFAD documents often do not distinguish between cooperatives and other types of FO.

In the context of the IYC, the Executive Board requested the Independent Office of Evaluation of IFAD (IOE) to study the Fund's engagement with cooperatives, particularly with regard to IFAD's evolving approaches to supporting cooperatives, lessons learned and good practices thatwould contribute to furtherdebate and reflection on the topic. To that end, IOE reviewed IFAD's policy and strategy documents relating to a limited but select sample of projects and grants, which revealed that IFAD has provided a wide range of financial support to cooperatives and similar organizations. A typology was also drawn up of planned and actual operations and lessons learned in designing and implementing projects and grants relating to cooperatives and similar FOs. However, to determine the full extent of IFAD's financial support to such organizations would have called for a much larger sample than the allocated resources allowed for the task.

IFAD's policies and approaches. IFAD has no stand-alone policy on cooperatives or other FOs, and the term "cooperatives" is not specifically mentioned in its strategy and other official documents. For at least the last two decades, IFAD has consistently promoted organizations with values and principles similar to those of cooperatives, and, when discussing support provided above the farm level, its annual reports or policy documents have used more general terms. From the late 1990s, and especially since the year 2000, the terms "farmers' organizations" and "rural people's organizations" appearing in the Fund's annual reports have implicitly encompassed agricultural cooperatives. In the IFAD Rural Finance Policy of 2000 (updated in 2009), the term "rural financial institutions" also encompasses cooperative savings and credit associations.

Terminology and study material. Because IFAD has not distinguished cooperatives from other FOs, and as most FOs are membership-based and democratically led, it was considered appropriate that they should be included in the study. The definition of FOs recommended by the IFAD-sponsored Farmers' Forum has been used, that is: "Farmer organizations are membership-based organizations of smallholders, family farmers and rural producers – including pastoralists, artisanal fishers, landless people and indigenous people – that are structured beyond the grass-roots or community levels, to local, national, regional and global levels." Cooperatives, which are also membership-based and democratically managed organizations, fall under this definition, as do non-cooperative, registered farmers' associations and economic farmers' associations. Local farmer groups and village development committees have not been included. Altogether, 25 projects from the five IFAD regional divisions and 10 grants, usually supporting multi-country activities, were selected for the study inasmuch as they included components in support of FOs.

Typology of IFAD's assistance to cooperatives and similar FOs. IOE reviewed the material (project and grant design, appraisal and President's Reports and Recommendations, plus mid-term review, supervision, ex post evaluation and project status reports) for information on the IFAD assistance that was planned and results actually achieved. Items of special interest were activities considered important for the development of cooperatives and other FOs, and for IFAD, and involved the inclusion of FOs in the goals and objectives of projects; components in support of such organizations; problems (challenges) identified and assistance planned and executed; governance issues; beneficiaries; gender promotion; and risk analyses regarding cooperatives and other FOs. The results of the findings are given in the main report but, for the purpose of this summary, the following aspects are highlighted.

Although establishing cooperatives and other FOs, and building up their networks and vertical support organizations, are demanding tasks, their management – especially of cooperatives – is even more demanding, particularly owing to their democratic nature and large, often poorly educated membership. The project and grant designers identified many potential problems, which the study team classified into the following broad groups:

The measures used to deal with such problems included:

These measures, applied selectively in individual projects and grants, generally produced at least moderately satisfactory results. In view of resource limitations, IOE was unable to evaluate the individual projects (and, in any event, only five projects had completed post-evaluations reports). However, the mid-term and supervision reports showed that all but four1 had average ratings of 4 or more (from "moderately satisfactory" to "satisfactory"); that projects rated below 4 were, on average, deemed as above "moderately unsatisfactory"; and that, with regard to institution-building, even the four weaker projects were rated above 4. In IOE's view, these ratings would have been higher had situational (economic, social, educational, historical and even psychological situations) and institutional (needs for capacity-building and institutional strengthening) analyses been undertaken before project/programme design.

IFAD has used cooperative projects – and to some extent other FO projects – to reach large numbers of beneficiaries and promote women's participation. In many places as much as 30 per cent or more of the thousands of beneficiaries are women. Cooperative savings and credit societies particularly facilitate access to financial services to women, and, unlike marketing cooperatives, also to farm labourers and other poorest-of-the-poor people.

Lessons and hypotheses. A review of the ex post, mid-term review and supervision reports on the projects and grants under study made it possible for IOE to identify a large number of lessons for planning new projects and programmes. The most important of these are summarized under the following headings and subheadings (see also paragraphs 135–149 of the main report):

As well as learning from individual cases, the study team took a broader view of the project and grant documents and presented a number of hypotheses with regard to topics such as combining multiple beneficiary groups and policies under the same intervention; achieving more rapid start-up of programmes when cooperatives are named as beneficiary groups; dealing with apex organizations' inadequate capacity to lead; assessing the capacity required to operate FOs; and calculating the appropriate length of FO projects and grants (see paragraph 149). As they were based on a relatively small sample, however, these hypotheses will need to be validated.

Validation by "benchmarking." IOE conducted interviews and reviews of documents with other Rome-based United Nations specialised agencies and with World Bank regarding their activities with respect to cooperatives and other FOs. It also reviewed the relevant Internet documents of a number of other multilateral and bilateral agencies as well as those of foundations promoting cooperatives. These reviews showed results similar to the findings of the study on IFAD's engagement with cooperatives. There was a common understanding regarding problems identified by multilateral/bilateral agencies on the one hand, and designers and evaluators of IFAD projects and grants on the other hand, indicating that, while not new, problems relating to cooperative developments differ from case to case.

Similarities also exist with regard to solutions, although tools used by individual agencies may differ. However, although the most suitable types of assistance are well known, it became clear that conditions vary so much across different countries that the general cooperative (or other FO) model needed to be adjusted for each country based on the historical, economic, and social conditions involved. In addition, tools to countermand the problem areas and promote the sustainable development of cooperatives and other FOs must be designed to fit to circumstances. Because there is much accumulated knowledge at the different development institutions, it will not be necessary to seek completely new solutions; instead, close collaboration between the professionals dealing with cooperatives and other FOs in the different development institutions should be promoted, and specialized persons used for situational analyses and programme designs.

The way forward. As noted at the September 2012 workshop, while this study represents an important stage in developing guidelines for dealing with cooperatives and similar organizations, a "way forward" will need to be developed. Recommended follow-up activities include identifying countries with different types of FOs, and conducting a thorough study of their effectiveness and modes of operation; preparing a number of success stories (and potentially viewpoints of the beneficiaries through a few testimonies); expanding the study to cover farmer associations not included in the report; validating the hypotheses presented; and recommending action tailored to different circumstances. 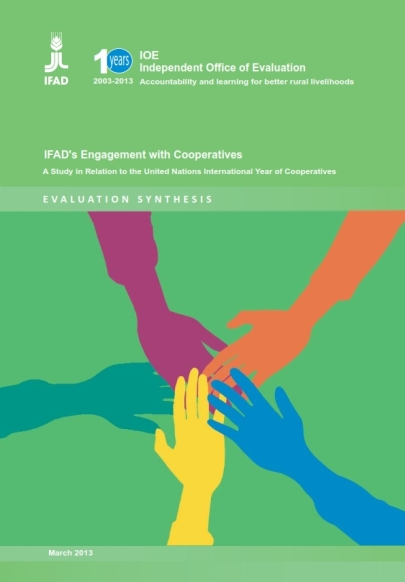