I would also like to express my gratitude to the Governments of Italy, the Netherlands, Sweden, Switzerland and the Arab Center for the Studies of Arid Zones and Dry Lands, whose generous contributions have made this report a reality.

A special welcome to our moderator and panelists who have graciously agreed to join us for this occasion.

I am happy to see so many of my IFAD colleagues in attendance; without your dedication and hard work this report would not have been possible.

It is a pleasure to be here in the majestic Tempio di Adriano to present IFAD's Rural Poverty Report to our friends in Rome.

As you know, IFAD has a very special relationship with this city. This is not just because Rome is a generous host to the three Rome-based agencies of the United Nations.

The city of Rome has always been at the forefront of international initiatives for food security. Over the years we have developed a rich and fruitful dialogue with the city and its citizens. And Italy's contributions have played a critical role in allowing IFAD to expand its projects and programmes to eradicate poverty in the rural areas of developing countries.

It is, therefore, a special pleasure for me to present  the Rural Poverty Report in this venue, which embodies the history and the spirit of Rome, the world capital of food security. 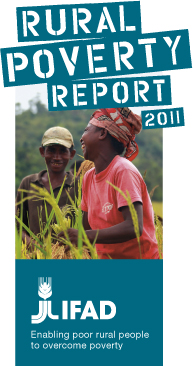 The sunny image on the cover of our report show Lionie Marceline, her husband Jean Doris, and their two children in Madagascar. They  are harvesting rice grown using techniques that increase yields while using less irrigation water and fewer seeds. The picture depicts the hope, the energy and the vibrancy that IFAD wants to see in all rural communities across the globe.

The report lays out evidence of how agricultural development has lifted millions of people like Lionie and Jean out of extreme poverty over the last decade.

But it also highlights people like Williams Novoa Lizardo in Peru, whose options have become so bleak that migration to the city is starting to seem like the only option.

Unfortunately, although there has been some notable progress in poverty reduction in recent years, extreme poverty continues to plague some 1.4 billion men, women and children.

Imagine that you are one of them. Chances are you would be living in the rural area of a developing country because, despite growing urbanization, this is where 70 per cent of the world's poorest people still live.

Chances are, you would be living in a village connected to other villages by dirt roads – if at all – with no electricity and no easy access to clean water.

The experiences of Williams Lizardo and Lionie Marceline are just two of the human stories that reflect the current state of rural poverty: one marked by progress, yet marred with continued obstacles.

The 2011 Rural Poverty Report is the most comprehensive and current assessment of the state of rural poverty.

It examines the vulnerabilities of poor rural people and the many risks they face.

It shows how rural development can provide greater food and economic security in the future. And it offers concrete suggestions for policies and actions to lift poor rural people from poverty to prosperity and contribute to national and global food security.

The 2011 Rural Poverty Report does more than analyze the numbers. It tells the stories of poor rural people - sharing their challenges, hopes and aspirations - so that their voices can be heard and acted upon.

When global food prices doubled between 2006 and 2008, the surge sent shockwaves throughout the world, dealing the greatest blow to low-income food-deficit countries. For the first time in history, the number of hungry people passed the 1 billion mark. For many poor farmers, especially those who are net buyers of food, the impact was particularly harsh.

Across the developing world, a range of natural resource related issues – such as water shortages, declining soil fertility, salinisation of irrigated lands, deforestation, erosion and desertification – threaten the very sustainability of agricultural production. Poor smallholder farmers are often unwitting contributors to this environmental degradation as well as the principal victims.

Climate change, and the floods and droughts that it brings, exacerbates processes of environmental degradation.

One major change for the better

But there is also good news.  The international community is focused on agricultural development like no time before.

With the world's population set to reach more than 9 billion by 2050, there is a growing appreciation of the need to secure our food supply. To meet projected demand, global agricultural production will need to rise 70 per cent by 2050. This is already starting to create new markets and new economic opportunities in rural areas.

Agriculture is an economic driver in many countries, generating growth that is at least twice as effective in reducing poverty as growth in other sectors. Investment in agricultural and rural development is therefore vital to food security and sustainable economic development.

In addition, new players from the private sector and civil society have stepped forward, including the Gates Foundation, Syngenta, Yara and others. Emerging economies, such as China and Brazil, are also becoming important players in rural development.

So, when we look at the state of rural poverty today, we're faced with a conundrum: Demand exists for more food. And yet many of the people who could produce it – the smallholder farmers, the labourers and the others who depend on the land – are unable to feed themselves or earn a living.

Ladies and gentlemen, we must ask ourselves: In the next decade, how do we allocate our resources to meet the desperate need for effective action? How do we create a hopeful future for young people, like Williams Lizardo, in rural areas?

This is the heart of our report.

We outline four steps to eliminate poverty and hunger. These are to:

And encourage the growth of non-farm rural jobs.

The first step is Managing Risk

For a farmer living on $1.25 a day, the ability to take a risk – on planting a new, higher yielding seed, on specializing rather than diversifying – is too often an unaffordable luxury.

Poor people have fewer tools to manage risk.  As a result, they cannot take advantage of opportunities that could help them improve their incomes.

If we help reduce these risks, it will be easier for rural people to be more entrepreneurial, creating the conditions for a vibrant rural sector.

Food tastes and agricultural markets are changing. In recent years, we have seen rapid growth in the reach of supermarkets, locally and globally  and the development of modern consolidated value chains for agricultural products.

Smallholder farmers must have opportunities to be entrepreneurs in the new, evolving markets, or they risk becoming marginalized. But, at present, their prospects of making higher profits from new marketplaces are often offset by high entry costs.

Much can be done to help poor rural people realize their business potential. This includes reducing transaction costs, supporting rural producers' organizations, expanding financial services into rural areas and ensuring that small farmers have access to infrastructure, utilities and information. Investing in good governance is another key ingredient.

The third step is to increase agricultural production sustainably

Increased food production must come without significantly expanding the amount of land dedicated to agriculture. Cutting down forests and woodlands to create more land for farming is not a viable option.

This means that higher productivity will be necessary.

There is particularly strong potential to improve productivity in Sub-Saharan Africa, where the average yield is just 20 percent of the potential.

But whether in Africa, Latin America or Asia, we will need to do increase yields in an environmentally sustainable way.  We can't afford to pollute, diminish the land or contribute to greenhouse gas emissions.

In other words, we must have sustainable intensification.

This means complementing conventional approaches to increasing productivity with a much stronger focus on soil and water management and overall farm production systems.

There is no universal method for sustainable intensification. Best practices will be determined by the local context. The challenge is to develop policies and institutions that can aggregate these local approaches to a massive scale.

Today, around 80 per cent of rural people are involved in farming to some degree.  In virtually all rural societies, women perform a large part (and often most) of the agricultural work and produce the bulk of the developing world's food crops.

To meet the growing needs of a hungry world, agriculture must be a viable and rewarding lifestyle for the large number of people who choose it. In order for agricultural development efforts to be effective, they must recognize and redress the obstacles women face in many developing societies.

But increasingly, a life in agriculture will be one of many choices for rural people.  This is not a threat to agriculture, but rather a chance to develop a more modern, diversified rural economy.

I have often said that speeches don't feed people – action does.

Today, the world is listening as never before. Action must follow. Developing countries must lead their own rural development. Where countries have shown the commitment, development agencies and others should step up their efforts.

IFAD is working with its partners to meet this challenge by scaling-up our support to rural development on the ground. As reflected in this report, we are also championing a new and more dynamic vision of rural development.

We know that smallholder agriculture can spur economic growth in developing countries and lift millions out of poverty, but only if it is market-oriented, profitable and environmentally sustainable.

A future for young people in rural areas

We must think not just of those engaged in smallholder farming today, but to the next generation who live and work in rural areas. Give them the skills and confidence they need to run profitable farms or start businesses, and they will become the community leaders of tomorrow. Ignore them, and they will have little option but to leave their homes and families to search for work in the cities.

I spoke of Williams Novoa Lizardo of Peru, who may be forced to leave his rural home to seek employment in the city.  I ask you to imagine a world in which Williams and the millions like him become economic migrants, leaving the rural areas of developing countries depopulated, and the cities even more crowded than they are today.

Now, I would like you to imagine a world in which Williams has the prospect of employment near his home and is able to envision a future with a comfortable home, a family, and enough money for his needs.

A world that offers hope for Williams and the millions of young men and women like him is a world that is better for all of us.

Thank you very much