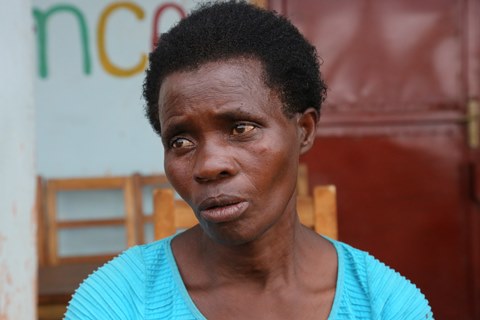 Rénilde Buhembe is one of many rural women who were forced to flee when civil war broke out in Burundi. With IFAD's support, she is now rebuilding her life and the lives of her six children through livestock and dairy production. ©IFAD/David Paqui

7 March 2017 - Rénilde Buhembe, 54, is a mother of three (two girls and a boy) who lives in the village of Rwingiri in Gitega province in central Burundi. She was widowed at age 18 and when in 1993, civil war broke out, she took in three more little boys who had lost their parents in the conflict. To feed the six children and herself, Rénilde worked as a labourer on local farms, earning Burundian Francs (BIF) 700 (US$0.40) a day.

In 1995, rebels occupied her village and she could no longer find work. Her life was miserable. Without food or money she fled, taking the six children with her as she was afraid the rebels would force them to become child soldiers. They travelled to another village where they were taken in by an Italian priest whom the local people called “Buyengero”. Father Buyengero welcomed them into his parish and offered them food in exchange for work. Rénilde had to take care of the garden and clean all the rooms in the parish. The two oldest children helped her with the work -- her daughter, 13, and one of the boys she had adopted who was 12 at the time.

Two years later, Rénilde heard that the rebels had left her village and she decided to go back. Father Buyengero had no money to give them but he gave them all clothes. Back in the village, she found her house completely destroyed. The rebels had stripped the roof, door and windows of wood to burn for fuel.

Although she was at home, Rénilde still couldn’t afford one meal a day so she queued up to get food from humanitarian organizations working in the community. She divided the food she received into two parts. She and the children ate half of it and sold the rest for cash.

“With the saving, I started a small business. I used to buy a small quantity of coffee and bananas and sell them in the village because I wanted to send all my six children to school but I could not afford to,” she said.

Early in 2007, Rénilde heard about the Livestock Sector Rehabilitation Support Project (PARSE), funded by IFAD. The livestock sector had suffered enormous damage during the 12 years of civil war, and was recovering slowly despite a huge demand for animal products.

PARSE was designed to support 100,000 families, in particular, women-headed households, unemployed young people and returnees with very limited land or livestock, or no assets whatsoever. Its aim was to assist them improve livestock productivity and marketing. Rénilde joined the women’s association of her community. As a vulnerable returnee and a woman with responsibility for six children, she was selected to take part in the project and received two pigs to raise. And slowly, they multiplied.

“With the income from the pigs, I started feeding the children and sending them to school. I could not believe it. I also bought a small piece of land. For me, PARSE was a miracle,” she said.

In 2010, Rénilde’s life changed even more dramatically when she was selected to take part in a new project supported by IFAD, the Agricultural Intensification and Value-enhancing Support Project (PAIVA-B). The project was designed to support post-conflict development, and is contributing to the fight against poverty among the country’s most vulnerable groups. The project works with more than 100,000 households, particularly small-scale farmers and returnees, helping them build their physical and technical capacity to increase productivity, improve nutrition and raise incomes.

In 2011, Rénilde qualified for benefits from PAIVA-B. She received a pregnant heifer which in two months had a calf. Soon after, Rénilde started selling milk. She also continued farming on her land and selling her crops and vegetables. Her household food security improved and she saved enough money to buy another five cows and increase her dairy business.

Through PAIVA-B, Rénilde was trained in dairy management, new farming techniques, leadership, family planning, women’s rights and land management. She attended study tours organized by the project in Rwanda and Uganda where she learned from the experience of farmers in both countries. “These opportunities have opened my mind and transformed my life,” she said.

Today, Rénilde employs three men full-time and six women two days a week to support her dairy business. On her farm, where she grows maize and other crops including vegetables, she employs 140 workers over two cropping seasons.

She is also sharing what she’s learned from the project by training women in her community on a wide range of issues, including savings, family planning, hygiene, new planting techniques and how to organize themselves into self-help groups. She is the first woman to have been elected as Chair of the Bugendana Dairy Cooperative in the Province of Gitega. She is now a respected leader in her community.

Thanks to the two projects supported by IFAD, Rénilde was able to send her six children to school and feed them three meals a day, whereas in 1995 she could not even afford one meal. Her older daughter finished school and is now the Principal of a school in Gitega city. She also takes care of one of the adopted boys who was severely malnourished but is now finishing the last year of high school.

In fact, Rénilde now earns enough to pay the university fees for two of the children, amounting to BIF 1 million (US$600) plus lodging. One of the boys she adopted is already married. She paid for the wedding and even built a house for him. She also gave him a piece of land and he now works as a farmer.

Today, when poor women in the community need milk for their children, Rénilde gives it to them free.

“I always remember when I was really poor. What I have today was given to me by God through PARSE and PAIVA, thanks to IFAD. Poor people of my community, particularly women will always get milk from me free,” she said.

“When I was poor, my dream was to have a cow and be part of a women’s association. Today, I have many cows. I am not only a member of an association, I am the Chairperson of a cooperative in my community,” said Rénilde. “My new dream now is to build a big house and buy a car and have a driver. I am confident that when I finish paying for my children’s university education, this dream will become a reality."