Ecuador: One year after the earthquake

Ecuador: One year after the earthquake 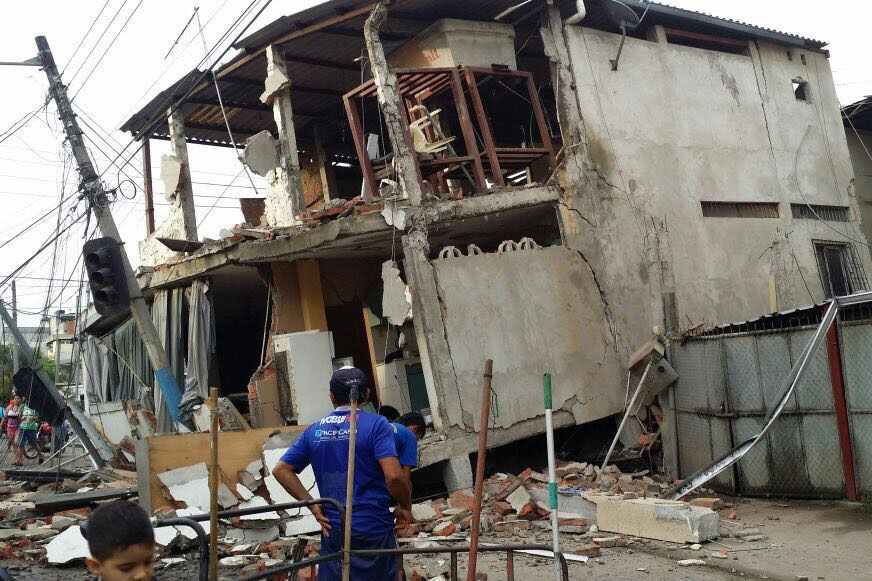 Thousands of buildings including this one in Portoviejo, Ecuador, were destroyed in the April 2016 earthquake. The IFAD-supported Buen Vivir Rural Pogramme, run by the Ecuadorian Ministry of Agriculture, Livestock, Aquaculture and Fisheries (MAGAP), had been operating in Manabí since 2013. Shortly after the earthquake, farmers in the area were mobilized to clear access routes and gather water and food and take it to the most affected and isolated people.

19 April 2017 -- Their house collapsed. And with it, all of their belongings and memories were lost. Fortunately, Manuel Reyes and his family survived. But not everyone was so lucky. Some 663 people were killed and another 80,000 were left without homes and livelihoods when the most destructive earthquake in 70 years struck Ecuador on 16 April  2016.

The western coastal province of Manabí, where Reyes works as a fish processor, was hit the hardest. And although thousands of families were accommodated in shelters in the days that followed, many others remained isolated and without food or water. Because populations were dispersed over long distances, providing relief to the most damaged areas was difficult. Quick action was needed.

The IFAD-supported Buen Vivir Rural Pogramme, run by the Ecuadorian Ministry of Agriculture, Livestock, Aquaculture and Fisheries (MAGAP), had been operating in Manabí since 2013. Shortly after the earthquake, farmers in the area were mobilized to clear access routes and gather water and food and take it to the most affected and isolated people. 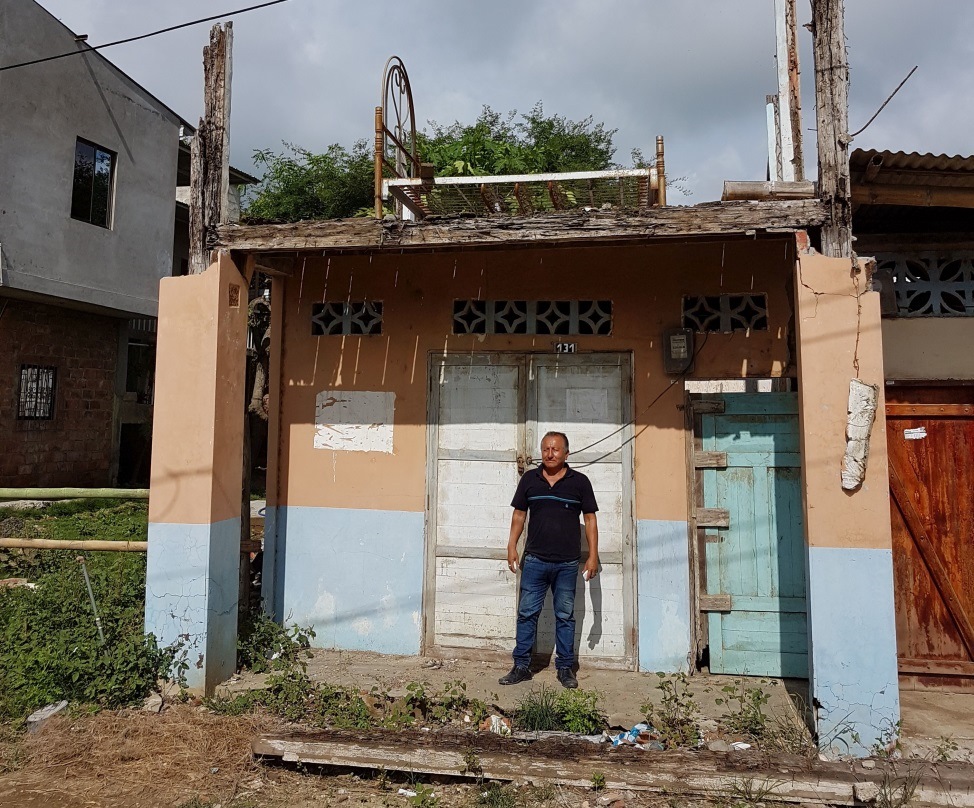 Manuel Reyes stands in front of his home which was destroyed by the 2016 earthquake. Now, he is working with other farmers and fishers to rebuild the rural community with support from IFAD. ©MAGAP

"The earthquake left us with an important lesson," he continued. "Organized rural communities, agricultural production diversity, and land cohesion are key to helping small farmers face these types of  natural disasters.”

Although hundreds of aftershocks and an unusually high degree of seismic events continued long after the earthquake, today members of the rural community feel they are more resilient to natural disasters, thanks to the work done through the programme. Reyes is one of the programme's participants and Chair of COGAEVISMA, an artisanal fishery cooperative.

"After the earthquake, everything was destroyed,” he says. “Not only did we lose our houses, but also our livelihoods. For a whole month, we had no place to store the fish. Thanks to the programme,  we now have a fish storage and freezing plant, which is making a big difference."

Through the programme, infrastructure has been improved and smallholder farmers and fishers are now organized into groups and cooperatives. They’ve also been connected to suppliers and local private sector outlets. Activities like these, along with workshops and food fairs, have helped the community grow stronger in the face of adversity.

"We organize several food fairs every year and have a regular local market, where we can sell our products. This did not change after the earthquake. We knew how important it was to keep on working together to overcome this terrible situation," adds Reyes. 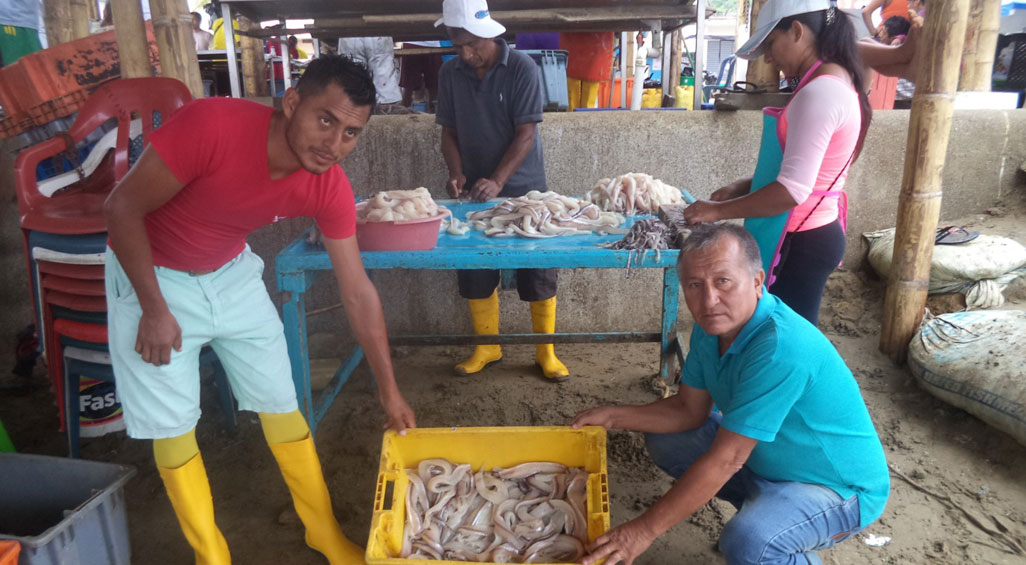 After the earthquake, many fishers lost their livelihoods as they had no place to store their fish. Thanks to an IFAD-supported programme, they now have a fish storage and freezing plant.

Over the last 10 years, Ecuador has made great efforts to fight poverty and inequality by increasing social spending and investments in infrastructure, leading to the modernization of hospitals and schools and improving the logistic communications in the country. The poverty rate dropped from  38 per cent in 2006  to 26 per cent in 2014 and the extreme poverty rate dropped to less than 5.7 per cent, according to the National Institute of Statistics and Census.

However, due to the recent economic slowdown, the positive trend has not continued at the same pace.  The rural poverty rate is still almost double that of urban poverty. What was already a difficult situation was exacerbated by the April 2016 earthquake.

"Ecuador’s smallholder farmers are essential to breaking the cycle of poverty and inequality in the region. By giving these farmers the tools and training they need to step out of poverty, we hope to diversify the rural economy, generate employment and increase their incomes," says Caroline Bidault, IFAD’s Country Programme Manager.

Despite the devastation left by the earthquake, Reyes still remains optimistic about the future:

"A year has passed and we can proudly say that we are a community with a fighting spirit that does not give up, not even against the most destructive and unpredictable events of nature."

Since 1978, IFAD has invested a total of US$130 million in 10 programmes and projects related to agricultural development in Ecuador, benefiting more than 271,767 households. At a cost of US$63 million, the Buen Vivir Rural programme, has helped 25,000 food-insecure, poor rural households (roughly 16 per cent of the country's rural population) living in nine provinces.