This was the first phase of the ongoing project in the Upper East region. It was designed to reduce rural poverty in an area prone to severe drought. The project focused on the poorest families, which were predominantly households headed by women. The project:

It also addressed potential health hazards of irrigation, such as malaria, bilharzias and other water-borne diseases.

Helping farmers increase production
In Ghana Upper East region, the wet season is short, irregular and relatively dry. During the wet season, rainfall barely suffices for one single crop and these fluctuations cause large variations in production potential from year to year. IFAD's Upper East Region Land Conservation and Smallholder Rehabilitation Project had the objective of increasing the incomes of rural poor people in the region while protecting the environment and improving access to water. The project worked with farmers to develop irrigation schemes and rehabilitate dams, and to improve planting material that would prove resistant to short rainy seasons.

The project introduced and promoted improved varieties of maize, millet and soybean, all of which are now cultivated in the region. The significant increase in production of these crops benefited poor rural farmers. 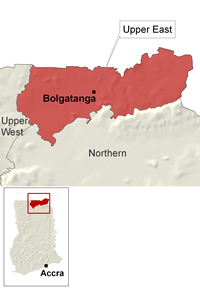