The project area included six collective farms in the districts of Barda, Lenkaran, Salyan, Udjhar, Xachmas and Sharur. Most of the land is fertile and has good agricultural potential. Crop yields in the past were moderate, but productivity has declined considerably since independence, largely because existing irrigation and drainage systems have not been maintained, and because it is difficult for farmers to obtain inputs such as seeds, fertilizers and pesticides. For people raising livestock, poor animal husbandry and lack of basic sanitation and disease control have hindered productivity.

The overall goal of the project was to support the government in the privatization of six collective farms, with the aim of improving incomes and living conditions in the target area. This entailed establishing a mechanism for rapid and equitable distribution of land plots and an accurate, cost-efficient land registration system. The project also rehabilitated the main irrigation and drainage systems, helped set up water users’ associations, and developed income-generating opportunities, especially for women and landless people. Project activities included:

The project has demonstrated that participatory irrigation management through water users’ associations provides a greater sense of ownership and ensures the sustainability of the systems.

The project also piloted an initiative to improve access to credit for farmers on the privatized pilot farms. Initially the credit programme showed low loan repayment rates, which were inadequate to ensure the sustainability of operations. But continued follow-up and supervision resulted in significant improvement in recovery rates, which exceeded 92 per cent.

The project was particularly successful in achieving its goals. The irrigation and drainage system was rehabilitated over an area of 17,116 ha, considerably more than anticipated. Six water users’ associations were set up to take over maintenance and operation of the system. Six business development centres were established to encourage off-farm job and income creation and to protect the most vulnerable people. The project provided about US$8.0 million to farmers as credit for inputs and investments. As a result farmers on the pilot farms reported marked increases in productivity.

After the completion of land privatization and farm restructuring in the target area, the government implemented the model created for the project on a nationwide basis. The project's participatory irrigation management model has also been adopted nationwide. 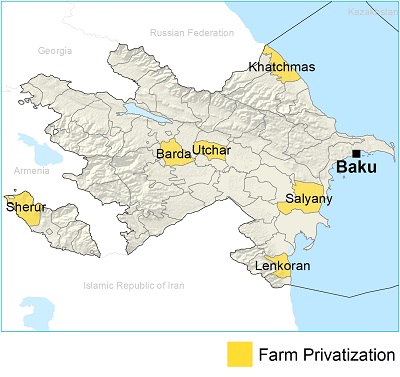