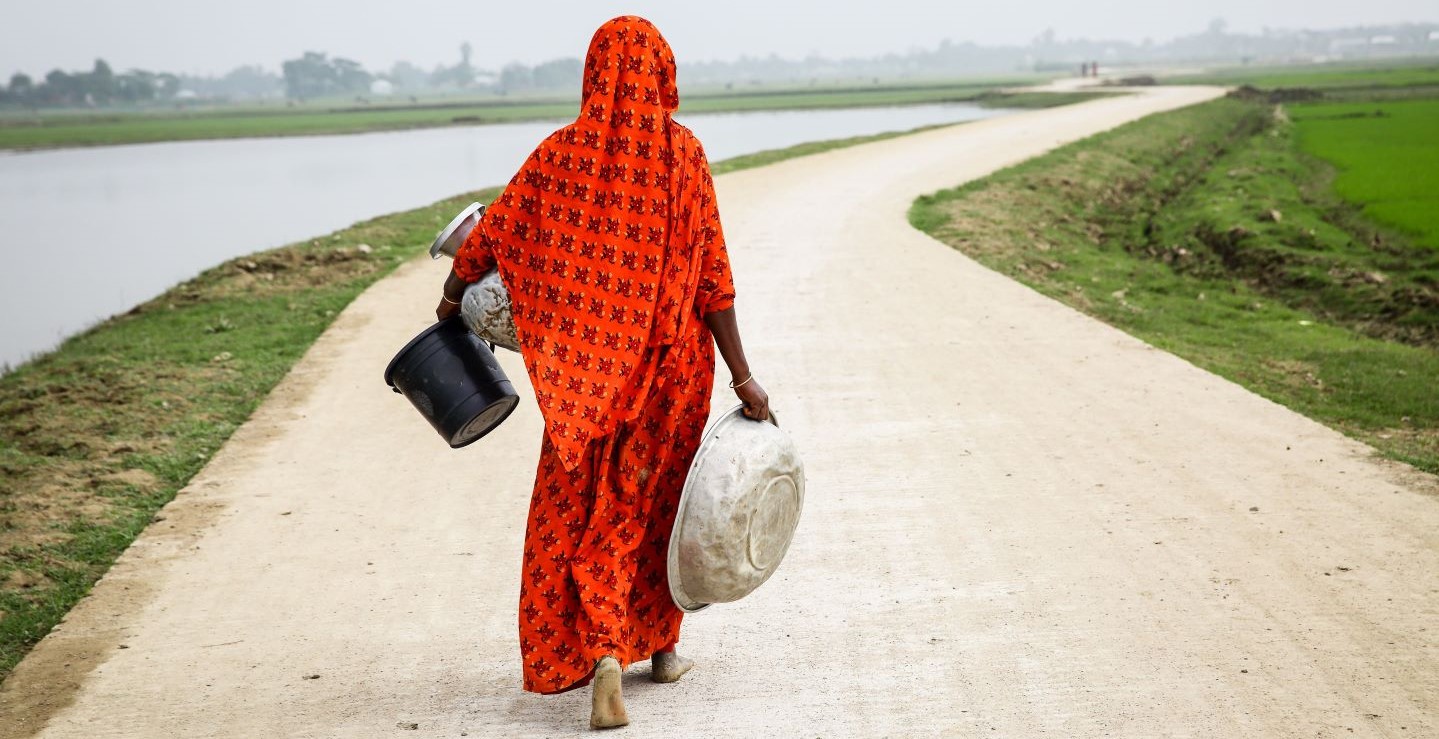 On one terrible day four years ago, Anjuli Rani Das’s life was swept away before her eyes. A flash flood engulfed her small duck farm, washing away everything she had worked for in the past years.

Today, the memories of the devastating flood of 2017 remain fresh across north-east Bangladesh’s Haor Basin. Over 200 tonnes of fish, 1.3 million livestock and 3.2 million ducks and poultry were swept away. About 90 per cent of the Boro rice harvest was destroyed, too – a significant loss, considering that this region provides a sixth of Bangladesh’s production of this rice variety. Anjuli herself lost her farm and animals, while her husband, an agricultural wage labourer, lost his income during what would have been harvest season: there was nothing left to be harvested.

“Life in the Haor region has always been unpredictable,” says Anjuli. “I grew up watching houses being washed away each year. My village was unprotected and exposed to waves and water.”

The villagers had always done their best to protect their homes from the recurring floods, but the costs were beyond them. “Every year, we collected money to try to protect the villages,” Anjuli explains. “Obviously, everyone wants to contribute, but with the very limited income opportunities during the monsoon season, these donations are a financial burden for most families.”

Although flooding during the monsoon season has always been a part of life in the Haor Basin, things have changed since Anjuli’s childhood. Rising temperatures due to climate change are increasing the intensity of the floods, and deforestation has stripped the natural barriers that once dampened the waves. The rainfall patterns seem to have shifted, too, bringing heavier rains even in the pre-monsoon season – which also coincides with the Boro harvest time in Haor. The area’s 20 million inhabitants, many of whom are amongst the poorest in the country, are largely dependent on farming and fishing as their source of income, and their livelihoods are increasingly at risk.

To help local communities adapt to the effects of climate change and reduce crop losses, the IFAD-supported HILIP/CALIP initiative has established a Flash Flood Early Warning System. Using data collected from 25 stations, the system combines weather forecasting and hydrological and hydraulic modelling to scan for the conditions that generate flash floods and predict them up to 10 days in advance. Small-scale farmers like Anjuli receive alerts through two channels: from the Bangladesh Water Development Board, which notifies the district administration and local agricultural officers, and through a smartphone app.

The HILIP/CALIP initiative has also contributed to climate-resilient infrastructure designed to protect villages, roads and markets. These include bioengineering methods such as reforestation efforts and the planting of vetiver, a deep-rooted grass that can stabilize slopes by holding onto the soil and reducing erosion, as well as building raised embankments to protect villages against flood-induced damage.

Over 344,000 people in the Haor Basin are now benefiting from the early warning system, while 140 villages are protected against flood damage by the climate-resilient infrastructure. More than 180,000 people from small-scale farming households have joined local common-interest groups and societies established by HILIP/CALIP. Through their membership in these groups, they can access trainings on various methods for adapting their farms and fish ponds to the effects of climate change. These include adjusting the intensity and diversity of their crops; reforesting with bamboo and swamp-growing plants; and how to use the vetiver and other embankment protections to tackle erosion, to name just a few. There are even classes on the ways that gender roles play into these adaptation efforts. Meanwhile, over 11,000 residents now belong to user groups managing beel community water resources designed to increase fish production and biodiversity.

Life is still difficult for small-scale farmers and fishers in Haor Basin, but the infrastructure and trainings are protecting homes and keeping roads open in the five districts where HILIP/CALIP is active, and the alert system gives plenty of warning. People in Anjuli’s village now have the ability to protect themselves and their assets from flash floods, and ample time to act.

“As a means to protect their product, the farmers can set aside crops for their consumption and the fishers can sell their fish in advance, even if they are not yet fully grown,” Anjuli explains. “That way, we get some financial relief. Otherwise, it would be hard for us to survive.”