The return of spring to Santiaogou, a tiny village nestled high in China’s remote, mountainous Qinghai province, should have been idyllic. But every year, as the grasses turned greener and the first breezes began to brush the highland hills, Ding Zong, the head of the village, began to worry.

Up and down the terraced hills surrounding the village, Santiaogou’s farmers were due to start planting their rapeseed, wheat, beans and potatoes – crops that represented not just food for all 1,230 villagers, but the entire year’s income. Technically, all they needed to sustain this lifeline was just the right amount of water – but that was precisely the problem.

As an upland village, Santiaogou relies on a series of irrigation canals, stretching from a spring high in the mountains down through the terraces, to deliver water to its 95 hectares of farmland. Each spring’s planting sessions were thus a carefully orchestrated cascade, balancing the time it took for the water to flow down the canals against the short window of opportunity each farmer had to plant under favourable weather and soil conditions.

As part of Ding’s duties, it was his job to coordinate this planting chain – and it was no easy task. The canals, built in 1995, were sorely in need of repair. They leaked at every turn, spilling precious water all along the descent. Those at the bottom had to wait days for the water to reach them, knowing that the lost time would translate into a reduced yield, and therefore reduced income – and when the water finally did arrive, there simply wasn’t enough to go around. Villagers frequently came into conflict with each other for priority, requiring Ding to intercede. But every spring, despite Ding’s best efforts, tensions simmered and a sense of hopelessness hung in the air.

Things finally began to change in 2016, when the IFAD-supported QLMAPRP project came to the area. The project set out to assist farmers in 13 villages throughout the greater Huangyuan county that were below the poverty line – and Santiaogou was among them. Project staff knew that restoring the region’s canal systems would be essential to their efforts. Many other villages throughout the county faced similar problems as Santiaogou, leaving a total of 11,900 hectares insufficiently irrigated – and therefore leaving the potential for increased yields and income out of the reach of hundreds of farmers. 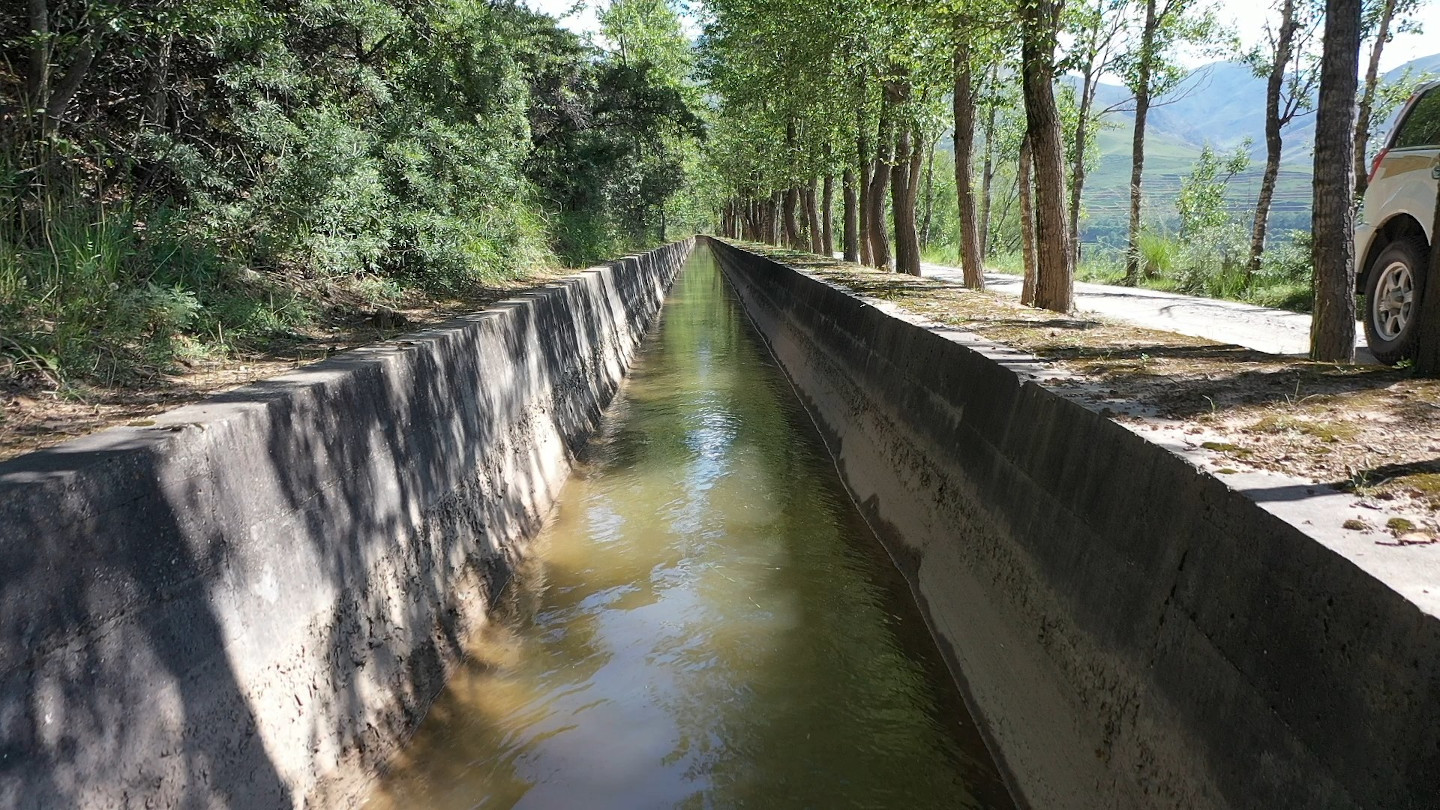 A section of the restored canal.

By the next planting season, Santiaogou’s segment of the canal system had a completely new face. The project also planted vegetation and shrubs along the canal networks, making them more resistant to rain and soil erosion and limiting the amount of water lost to leakage. These improvements save 2.64 million cubic metres of water annually, finally allowing irrigation water to reach all 95 hectares of Santiaogou’s farmland.

The other benefits to Santiaogou village were quite evident, too. Crop yields increased almost immediately, with the local County Agricultural Bureau registering an additional 2,350 tonnes of cereal crops and 119 tonnes of oil crops as compared to previous seasons. Local farmers were able to plant water-sensitive cash crops, such as vegetables, for the first time. Household incomes increased by 7 per cent from the land alone. Villagers no longer needed to spend hours and hours of idle time on their farmlands waiting for the irrigation water to arrive. And with no need to ration water, tensions eased and a sense of neighbourly friendliness returned to Santiaogou.

These were, however, not the only changes that Ding and his fellow villagers experienced. With the canals restored, the project began to advocate for water user associations (WUAs), groups through which farmers can collectively govern and manage the shared use of water resources. The concept of a WUA was not entirely new to the villagers – there had been something like it in place before the arrival of the project – but there had been only one organization to cover the entire project area, and it had struggled to assert itself given the widespread problems with the faulty irrigation canals. 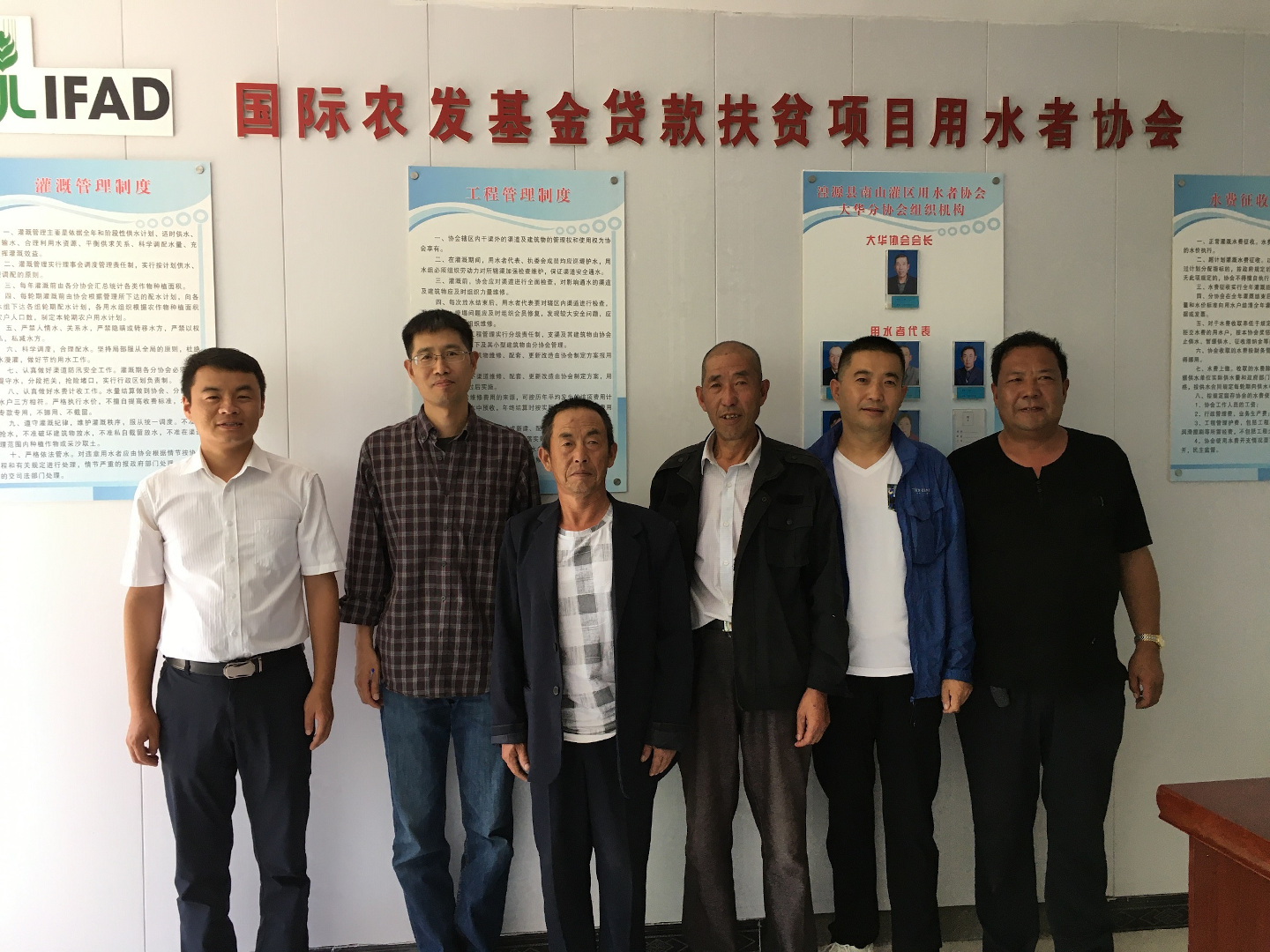 Ding (third from right) and fellow members of his WUA team are pictured with a County Bureau of Water Resources staffer (far left) and IFAD project representative (second from left).

The project helped the locals set up six smaller WUAs, each responsible for a more manageable area of land. And when it came time to choose the representatives, Ding was elected as not just the representative for Santiaogou village, but the head of the entire WUA for his village cluster. Given his esteemed reputation and his earnest, responsible nature, the local farmers couldn’t think of anyone else they’d rather have in the role. Ding was honoured.

The project also organized trainings, covering everything from good management practices for the WUAs to basic maintenance for the canals to best-practice irrigation techniques. Even villagers like Ding who have been farming for decades found the trainings useful – and also found that they gained a new sense of confidence in their self-sufficiency.

Today, the WUAs are essentially run by the villagers themselves. They collect dues and organize regular maintenance, coming to decisions by consensus. Planting season is still their busiest time of year: even though the new canals ensure there’s enough water for all, Ding and his team still have to develop an irrigation plan for the farmland under their jurisdiction, coordinating the demands of different crops and their stages of growth while balancing priorities among the various villages and households. They also regularly visit the canals and help direct water to different areas according to the plan. Disputes still arise from time to time, but they’re much easier to manage these days. Meanwhile, a resource-sensible water pricing reform, kicked off during the project, is giving the WUAs better prospects for their sustainability and self-governance.

Inside the brand-new WUA office, among all the irrigation regulations and territory maps tacked to the wall, is a photo of Ding smiling happily. He carries out his duties diligently and affectionately, confident that he won’t disappoint his fellow villagers. The county is prospering – thanks to the project, and with the support of additional government-sponsored programmes, all 13 villages have transitioned out of poverty. And every spring brings fresh breezes and bursts of colour to the village fields – as idyllic as it always should have been.

View of a portion of the canal during the flowering season.