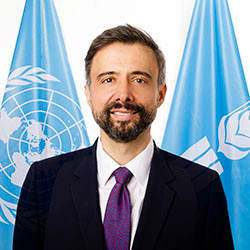 Italy has a long tradition of global leadership in the areas of sustainable development and food security. And today, at a time when there is an urgent need for climate finance, the establishment of the 4.2 billion Euros Italian Climate Fund is critically important.

For countries eligible for Official Development Assistance, the ICF offers the hope of a lifeline to adapt to and mitigate the impact of climate change.

We all know how serious the situation is today. In Europe, we may be heading into recession, and a bleak winter. For the world’s most vulnerable countries, the outlook is even more concerning.

Climate change and a growing global food crisis are escalating the risk of famine, poverty, and social upheaval.

It is estimated that developing countries need US$100 billion a year to adapt to a 2oC warmer world by 2050.

But we must not stint in funding the climate response. Climate change is a leading cause of food insecurity. A rise in temperature of just one degree reduces cereal yields by about five per cent.

As we have seen this year – farmers around the world are on the front lines of climate change.

When food production fails, farming families face a terrible choice: they can migrate, they can compete with neighboring communities for food, or they can risk starvation.

Few people really want to leave their homes, friends, and heritage to trek thousands of miles to an unknown and uncertain future.

What they really want is to be able to adapt to climate change, improve their food security and enhance their quality of life – with better prospects for their children, and grandchildren.

Today’s food crisis is not only the result of the war in Ukraine, or of the COVID pandemic, or of climate change. It is primarily the result of long-standing weaknesses and under-investment in sustainable and inclusive food systems.

Small-scale farmers feed two-thirds of the world’s population but receive less than 1.7 per cent of climate finance.

We need to massively scale-up of investments in climate adaptation, rural development and agriculture now, so that small farmers can bounce back from shocks, such as climate change. And we must also strengthen food security, and reduce countries’ dependence on food imports.

More than one-third of all greenhouse gases are due to food production.

And food production uses about 70 per cent of the world’s freshwater.

It is driving biodiversity loss. Farms have lost 75 per cent of their plant genetic diversity in the past 100 years. One million species are threatened with extinction.

This is largely the result of our dependence on large-scale, industrial farming.

Small farms are not a major source of greenhouse gas emissions.

They practice rainfed agriculture or use micro irrigation, and do not depend heavily on freshwater for crops.

They preserve biodiversity instead of depleting it.

They are home to a wide range of plants, insects and pollinators.

This keeps carbon in the atmosphere, and helps regulate the climate.

IFAD is uniquely positioned to mobilize finance and direct capital to ventures that reduce greenhouse gas emission along the agri-food value chain.

Each dollar of core contributions to IFAD delivers $6 to $8 of investment through cofinancing and partnerships.

At IFAD, our entire portfolio is looked at through a climate lens. 90 per cent of our climate finance is dedicated to adaptation. Many of our climate adaptation approaches involve nature-based solutions -- that is, using ecosystem functions to protect biodiversity and build resilience to climate change.

Our flagship Adaptation for Smallholder Agriculture Programme (ASAP), has already provided funding for adaptation to more than 6 million smallholder farmers across 41 countries. In a new phase, ASAP+ will specifically target food insecurity, and aims to mobilize US$500 million to reach some 10 million people

At IFAD, we know that we need strong global partners to achieve our climate goals and build a future that is food secure.

We look forward to joining with the Italian Ministry of Environment and Cassa Depositi e Prestiti on a global coordinated action under the Italian Climate Fund to ensure agriculture becomes a solution to climate change.

IFAD was just selected to lead a multi-billion-dollar food and agriculture pillar for the Government of Egypt under Egypt’s National Climate Change Strategy for 2050.

Ahead of COP27, the Government launched an innovative and ambitious programme, the Egypt Country Platform for the “Nexus on Water, Food and Energy (NWFE)”. This is made up 9 projects with a total cost of US$14.7 billion.

The Government of Egypt called on development partners to channel their investments under a W-F-E (Water, Food, Energy) nexus and have chosen 3 lead agencies: EBRD for Energy, AfDB for Water, and IFAD for Food and Agriculture. This is a strong signal of trust and recognition of IFAD’s leadership in the sector and key role as an assembler of finance