The woman who walks with llamas

The woman who walks with llamas 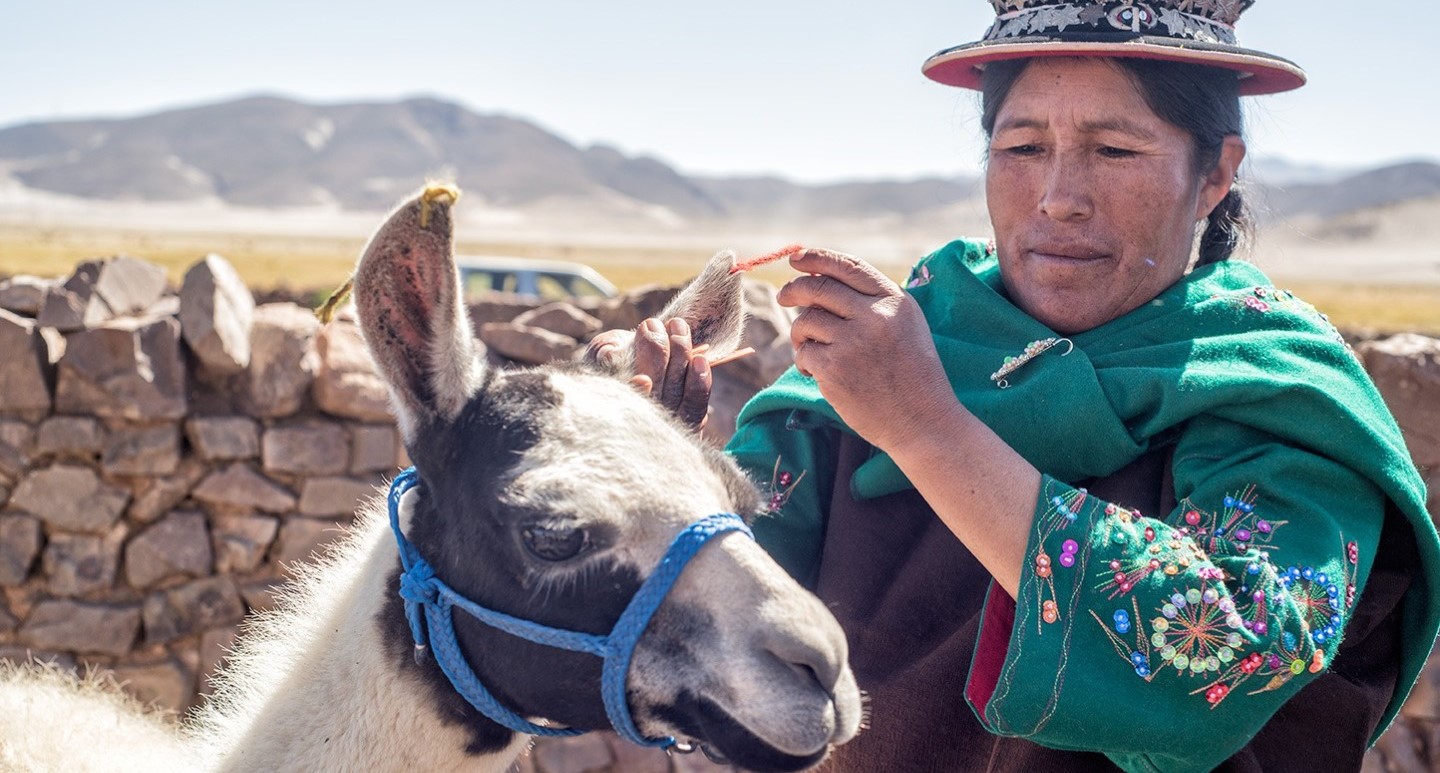 At the National Camélidos Fair in Potosí, Bolivia, Andrea Choque Paco looks proudly at Maruja, the k’ara-variety llama she has brought from her village, Chaquilla, to represent Potosí department in the national competition. Maruja is already a champion: she won first place in her category in the municipal fair, and placed second in another major competition.

Thousands of Bolivian families, particularly in the Altiplano, the high-plateau region of the Andes where Chaquilla is located, depend on breeding camelids for their livelihoods. Llamas, alpacas and vicuñas are a fundamental part of Andean ecosystems. They provide fertilizer for tubers and quinoa, fibre for festive and everyday fabrics and, of course, highly nutritious meat.

A single mother and the youngest of 18, Andrea knows that as a woman you have to be very determined to achieve your goals in an environment where men and women don’t have the same opportunities.

“When we were little, my mom was always pregnant. She was alone, no one supported her and my father worked very little. When he’d arrived home he’d complain to her and he’d never be satisfied with what she did. How could she do more? Whenever she tried, a kid was crying and she had to attend to them,” Andrea says.

Andrea and her sisters were expected to follow in their mother’s path. “I was only able to complete up to sixth grade. When I asked to continue studying, my dad said no. Women were to take care of the home, and only men were supposed to study.”

Indeed, Chaquilla is inhabited mostly by widows, elderly women and single mothers. Many of the men have migrated to urban centres for work.

Andrea’s elder siblings are among those who left to create new lives far from home. Andrea also migrated in search of better opportunities, first to Santa Cruz and then to Chile, but her heart remained in Chaquilla. “I don’t think it is better to live in the city, where we are discriminated and mistreated,” she says. “For me, it is better to live in the countryside.”

Then, one day, her father asked if she, the only child who was able to return, would be his heir.

Although normally sons take up this role, Andrea immediately agreed. And, as her father’s heir, she immediately stepped into a new position. Andrea was now responsible for maintaining community traditions, and in doing so, she began to change paradigms around what women could achieve.

When the Pro-Camélidos project came to Chaquilla, Andrea immediately saw its potential. This IFAD-supported initiative is implemented by Bolivia’s Ministry of Rural Development and Lands, and seeks to improve camelid breeding in rural communities through investments in better breeding practices, fencing and water troughs. In doing so, it is improving livelihoods across the Altiplano, especially for women.

Andrea joined the project as one of 34 families participating in Chaquilla. She became part of the village committee to cross-breed Pro-Camélidos llamas with the native creole variety, resulting in large, hardy animals that produce high-quality meat and fibre. In her position as heir and a village authority, Andrea worked tirelessly to ensure that everyone in the tiny community benefitted.

But first, the community members had to bring the llamas bred by Pro-Camélidos from Oruro to their remote village – a distance of over 400 km.

“We walked through the mountains for several days,” Andrea recalls. “Sometimes we wouldn’t eat, but it didn’t matter: we were convinced that it was the best way to improve our conditions.”

Together, they brought more than a hundred llamas over the mountains, and began to use the improved practices they had learned.

Three years after those first journeys through the mountains, the animals tended by the women of Chaquilla are larger and healthier. Where once the sale of a llama’s meat yielded up to 800 bolivianos (US$116), now each animal goes for 1,200–1,300 bolivianos (US$175–188).

“All our hardships had their reward, because now we see how these llamas are improving our creole breed,” says Andrea. The four llamas she brought in two trips to Oruro have helped improve the quality of her herd. From 12 llamas, she now has 22. “Since the arrival of the Pro-Camélidos project, not one of them has died,” she says. “They are well cared for, eating well and with the new fencing, they are sheltered.”

By the time the Pro-Camélidos programme ends in 2021, over 8,500 families, including many led by women like Andrea, will have accessed support to improve the quality of their livestock.

“I am single, but I never needed a man to help me,” says Andrea. “I alone made the bricks for my fence and my house. And, now, I have shown that I can do men and women’s tasks alike.”