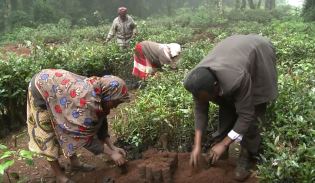 Kenya: Growing with the Flow

Like thousands of poor farmers living on the slopes of East Mount Kenya, Christine Mugure Munene used to depend on seasonal rains to water her crops. Now she has water whenever she wants.

Small-scale fishing communities in Mozambique struggle to eke out a living in remote areas with depleting resources. An IFAD-supported project has helped build artisanal fishers' capacity to improve their livelihoods while reducing pressure on resources, and to link with higher authorities to ensure that their concerns are voiced at the ministerial level.

In rural households throughout the developing world, women and girls work hard each day to protect their families' basic rights to nutrition, health and well-being. Research shows that they comprise 43 per cent of all smallholder farmers and spend an average of 20 per cent more time than men working on agricultural and domestic chores. Yet they have far less control over the land they cultivate or the income they earn.

In many ways, Niger is a country on the edge. Geographically, its productive farmland is confined to a narrow, semi-arid band across the south. Politically, it remains stable in the wake of peaceful elections held last year, but crises in neighbouring Libya, Mali and northern Nigeria have driven thousands of refugees across its borders. Socially and economically, its human development indicators are low, and it is among the poorest nations in the world.

A statement of intent to build a stronger partnership between the Bill & Melinda Gates Foundation and the International Fund for Agricultural Development (IFAD) means improved support for the world's smallholder farmers.

Beyond the Arab Awakening: Research panel links food security and conflict in the Middle East and North Africa

As popular discontent swept across much of the Arab world over the past year, some observers were puzzled. “How is it,” asked the World Bank’s World Development Report 2011, “that countries in the Middle East and North Africa could face explosions of popular grievances despite, in some cases, sustained high growth and improvement in social indicators?”

Burundi back on its feet: rebuilding after conflict

"When the massacres began in 1993 we were forced to take sides, seeking protection with either the government or the rebels", says Jean-Claude Sindayihebura, who is from Burambi in Bururi province.

Equity investment in rural Armenia: A business model with a development impact

When is an equity investment fund more than just a money machine? When it focuses on development rather than quick riches. That's exactly what a unique IFAD project has been doing in Armenia since 2009, with investments in the country's food-processing sector designed to expand markets and improve the economic prospects of smallholder farmers. Known as the Fund for Rural Economic Development in Armenia (FREDA), the initiative combines elements of both development assistance and banking.

IFAD for southern grown development solutions Rome, 19 December 2011 – While the financial crisis still casts a shadow over many countries, the benefits

The International Network for Bamboo and Rattan (INBAR) estimates that approximately 1.5 billion people depend in some way or another on bamboo and rattan.

Increasing the knowledge and assets of poor families is an effective way to fight poverty. An innovative IFAD-supported project in the southern highlands of Peru provides grants directly to small producers and to farmers’ organizations so they can develop new income opportunities.

The grass is greener: rehabilitating the Syrian Badia

After years of intensive grazing and severe drought, the Syrian steppe, or Badia, has become badly degraded. An IFAD-supported project is working with local communities to regenerate and manage the rangelands for long- term productivity. Rehabilitation has restored vegetation and helped reduce herders' vulnerability to drought and the effects of climate change.

An innovative scheme in Egypt is creating work for the country’s large number of unemployed graduates and boosting the economy by reclaiming agricultural land from the desert.

Helping nomadic families prepare for a complex future in Mongolia

Mongolia’s punishing climate and short growing season limit the variety in people’s diets and require families to work hard during the brief summer.

New evaluation on gender equality and women's empowerment in IFAD's projects points the way to further progress Rome, 7 February 2011 – An evaluation of

A new agricultural research centre is helping Pacific islanders fight the effects of climate change and feed their people. Its work in crop production and improving soil fertility under island conditions offers benefits not just for the Pacific region, but for island groups throughout the world.

Lobi is one of the most remote areas in Malawi. Located west of the market town of Dedza along the Mozambican border, it takes one hour travelling on a track road to reach the area.

Rome, 11 February 2010 – The Presidents of the Italian Republic and of the United Republic of Tanzania – Giorgio Napolitano and Jakaya Mrisho Kikwete –