This project comes as a direct response to a formal request from the Government of India to scale up successful tribal development programmes in the State of Jharkhand, based on a concept note prepared by the Government of Jharkhand.
The overall project goal is to improve the living conditions of tribal communities, especially primitive tribal groups (PTGs), across Jharkhand. Specifically, the project aims to empower and enable 136,000 tribal households, including 10,000 PTG households, to take up livelihood options based on sustainable and equitable use of natural resources. To that end, project activities involve community empowerment, integrated natural resource management and livelihoods support.
Jharkhand has a population of 33 million, of whom 26 per cent are members of scheduled tribes and 78 per cent are rural. The project will be implemented in 14 districts in the state, focusing on approximately 30 sub-districts that have a rural tribal population of more than 50 per cent and at least half the population living below the poverty line. 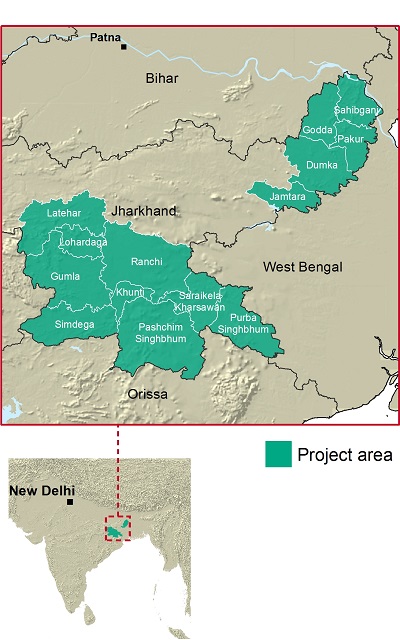