Hailemariam Desalegn was the Executive Prime Minister of Ethiopia who served from August 2012 until April 2018.

He previously occupied the positions of Deputy Prime Minister and Minister of Foreign Affairs; Minister of Social Affairs and Government Chief- Whip Minister. He was also Governor of the Southern Regional State for six years.

With a Master’s degree in Water and Environmental Engineering from Tampere University of Technology in Finland and a second Master’s in Organizational Leadership from Azusa Pacific University in California, he served in various academic and administrative capacities, including the Dean of the Water Technology Institute of Ethiopia.

After leaving office, Desalegn co-founded and is the chairperson of Hailemariam & Roman Foundation that focuses on mother and child healthcare, prevention of non-communicable diseases, nutrition and climate smart agriculture and conservation-based ecotourism.

Currently, he is serving as board member and chairperson of various local and international organizations such as Alliance for a Green Revolution in Africa (AGRA), Tourism Ethiopia, International Crisis Group (ICG), The Brenthurst Foundation, and the Global Steering Committee for the Campaign for Nature. 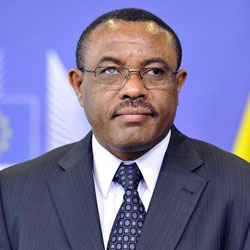