Rural young people are increasingly concerned about the environment. Many of them work in sectors that are threatened by climate change, and they’re well aware that their industry and food systems will need to become more resilient and sustainable than ever before.

In this context, the creation of decent green jobs – those that contribute to preserving or restoring the environment – is increasingly being seen as a potential solution. Moreover, projections estimate that sustainable management practices could generate up to 60 million new agricultural jobs.

Rural youth’s perspectives on the rise of green jobs are invaluable. In recognition of this, IFAD and the Dutch Ministry of Foreign Affairs have joined forces and opened a consultation space for rural youth.

In a recent dialogue, we asked our participants – who hail from all across Africa – what they each thought was most important for promoting the growth of rewarding green jobs in rural areas. Their answers reflect the variety of different challenges they’re facing – and their agreement that climate-smart solutions, opportunities for public-private-producer partnerships, peer-to-peer learning and digital platforms are the way to go. 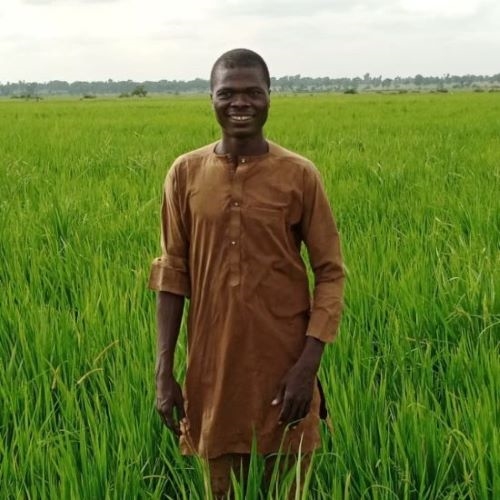 Aminu is a youth leader and a paddy aggregator, collecting rice from small-scale farmers to sell it to bigger buyers. Though he ultimately decided to dedicate himself to agriculture, his background is in computer science – and he brings that same technical focus to his agribusiness. Not only did he reschedule the entire cultivation calendar to the dry season by making judicious use of a pump system, he’s also developed his own digital platform to sell his products directly to consumers. For Aminu, getting youth involved in policy-making processes at all levels is the way to a green economy. He’d also like to see more capacity-building opportunities for rural youth – and he thinks digital marketing will help young farmers keep their sales strong. 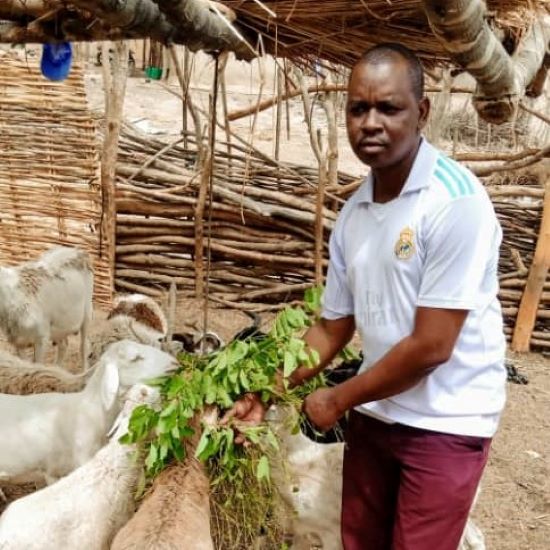 Bourahima is president of the Rural Youth Finance Network and part of the Association of Breeders and Fatteners of the municipality of Narena. On his farm, he tackles climate change and soil degradation through the use of climate-smart agricultural techniques: he uses only the organic manure from his cows and he promotes the use of highly productive climate-resilient seeds. Bourahima thinks public-private-producer partnership holds the key to making green jobs flourish. He wants to see more public actors – like school canteens and government institutions – buying directly from youth-led agribusinesses. 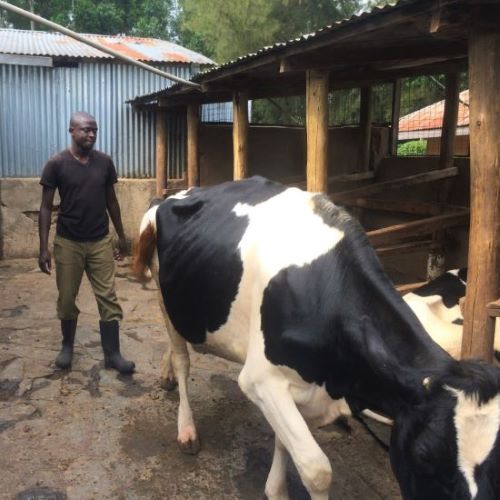 Elly is a dairy farmer, owner of the family-run organic Matende Holstein Farm. He also trains other youth, both those who are already in agriculture and those who are interested in joining, on different aspects of dairy farming – from incorporating organic farming practices to making their agricultural activities more sustainable. For Elly, this kind of skill-sharing is crucial for a green economy. “I believe it is important to encourage peer-to-peer capacity-building activities that, in addition to providing adequate competencies, would also boost a change in the perception of younger generations towards green jobs,” he said. 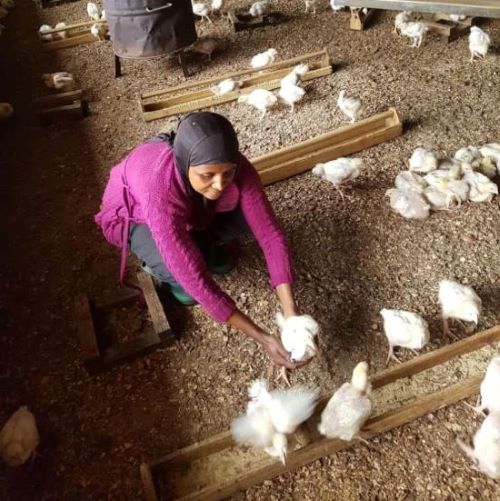 Ali is a producer of broiler birds, which she advertises and sells through various digital platforms. She also uses her birds’ manure for gardening, an organic practice that allows her to take advantage of the synergies between crops and livestock through the productive use of waste. She believes agroecological practices like these – ones that aim to increase crop diversity and reduce external inputs – should be incorporated more widely. Ali is also concerned about the connections between farmers and markets. She sees the lack of roads, in particular, as a major cause of multiple challenges facing rural areas, from the loss of perishable crops to the tendency for many youth to migrate to urban areas in search of work. “Good roads will facilitate the transport of food and reduce post-harvest losses,” she said. “They would also contribute to the reduction of the youth exodus.” 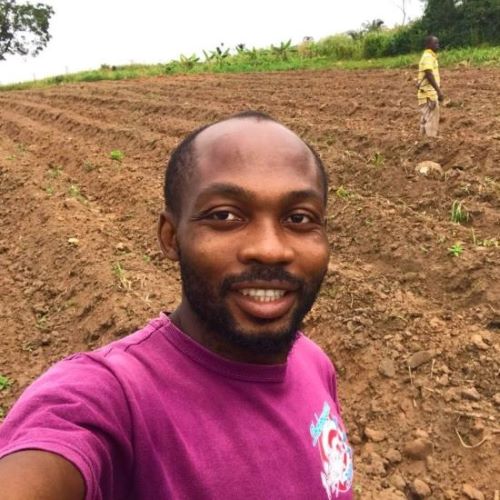 Henry is an organic farmer. He’s also the project lead of Guzakuza, a team that trains young women, students and farmers on the importance of organic farming and supports them in starting or scaling up sustainable agribusinesses. Henry brings that same business acumen to the question of green jobs. He’d like to see more “mentorship programmes that can provide young people with the appropriate entrepreneurial skills and accompany them along their business development path,” as he puts it. 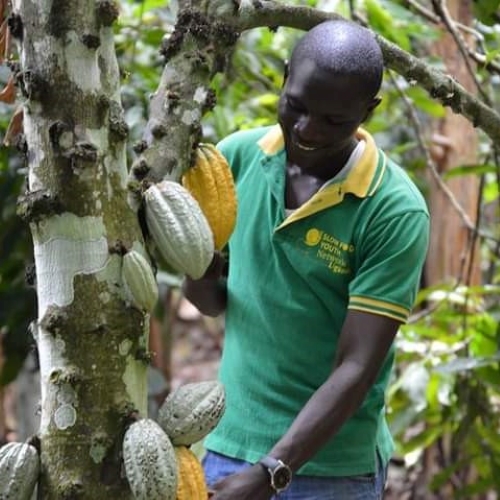 John is the coordinator of the Food Academy at Uganda’s Slow Food Youth Network, through which he trains young farmers on agroecological practices. He also raises pigs and grows crops of his own. In his work, he sees a lot of viable crop being lost due to oversaturated markets – so he thinks investing in technology that helps avoid food waste will be crucial in the years ahead. As he sees it, helping green jobs go digital will also make them attractive to future generations of workers 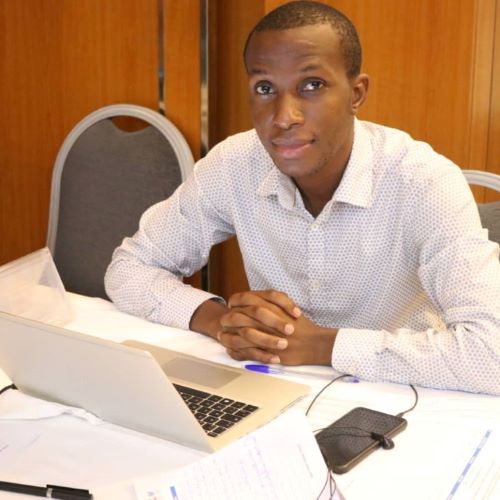 Kone is part of the Climate Smart Agriculture Youth Network, through which he helps young people – both newcomers to agriculture and those already in the sector – improve their agricultural knowledge, market research skills, and establish connections. Kone sees digital spaces as meeting spaces for rural youth. He hopes that technological innovations can facilitate connections between rural youth – and that platforms such as these can increase their engagement, too. He’s also hoping that development partners, such as governments and NGOs, will engage more widely with youth working in agriculture.

After having listened to all the dialogue participants, the Ambassador for Youth, Education and Work at the Dutch Ministry of Foreign Affairs underlined that young people should not be discouraged when starting their own businesses. Set-up costs are often high, which can seem daunting to young people hoping for “quick wins,” and benefits are typically only seen over the long term. In addition, even though green agriculture has enormous potential as a sector, profitability has to be kept in mind as well.

Nevertheless, he concluded, rural young people – like those participating in the dialogue, and countless others – have demonstrated that it is possible to have agricultural businesses that are both sustainable and profitable.

IFAD, too, knows that sustainability and profitability can be found together – and that rural youth are among the drivers of a new green economy. Just as for many of the dialogue participants, engaging with the private sector is also a high priority for the Fund. IFAD has already begun setting up new tools and policies to deepen its engagement with the private sector as a way to support the growth of job opportunities for rural youth – and a sustainable future.

This story was produced for the Youth at Heart Virtual Forum, an event dedicated to engaging rural youth in the green economy.