IFAD-supported projects help women come back to the countryside

Life in the countryside isn’t always easy – especially for rural women, whose contributions and successes have only recently begun to receive the attention they deserve.

But rural women are strong and resilient and, given the opportunity and adequate support, they can prove to themselves – and to the world – that they can thrive, leading and contributing in ways that benefit not only themselves and their families, but entire communities.

Eliza and Irma are proof positive of this. Their stories are different in many ways, and yet so similar. These two young women, originally from the Bolivian countryside, each spent some time living in the city but ultimately moved back to their hometowns – and, with help from the IFAD-supported ACCESOS project, they’re each running a successful business. 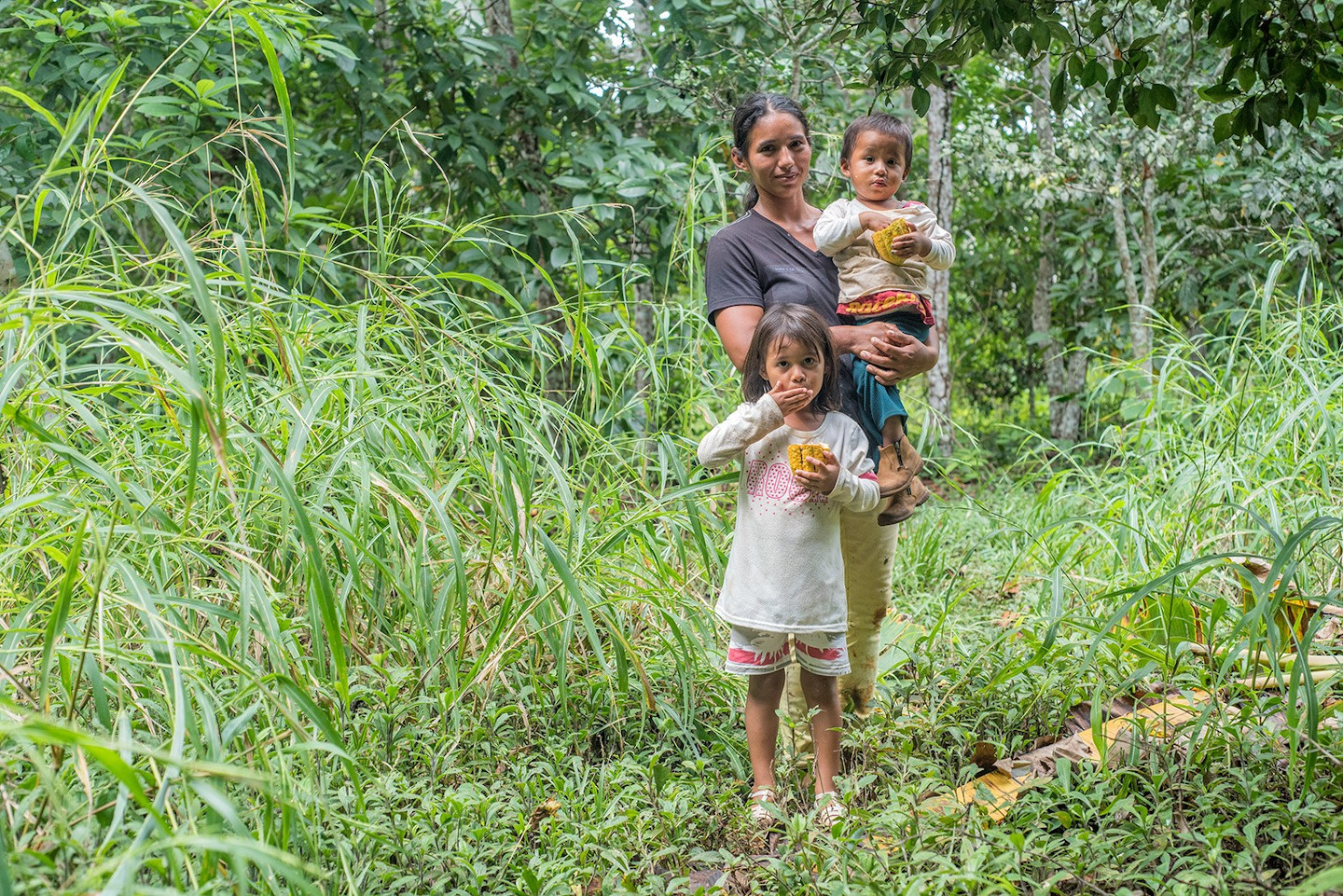 Eliza and two of her children take a walk through the Rocamero Association’s lands.  (© Juan Manuel Rada )

Eliza Roca is a 28-year-old mother of three from Filadelfia, a small town nestled in the rainforest of northern Bolivia. She’s a member of the Rocamero Association, a group of five families devoted to recuperating degraded lands through good agroforestry practices.

Some years ago, she left Filadelfia to study in the city of Santa Cruz, though she stopped her studies at age 20, when her first child came along. She stayed in Santa Cruz for three more years, washing dishes in restaurants, but she eventually got tired of it and decided to head back. “It was too much of a sacrifice for so little money,” she explains.

Today, she’s focused on her work with Rocamero. For her and her fellow members, the agroforestry they practice is much more than just a business. Their 37-hectare plantation is filled with tree crops that are both profitable and restorative for the local ecology. This recuperation of the barbechos, as they call degraded lands, is key in this area of the Amazonas rainforest. “People are amazed that everywhere on our land you have trees and fruits. It really looks like a forest,” she says.

They grow banana and yucca, mara trees (a variety of mahogany), sinini (a medicinal plant), asaí (a palm tree), cocoa and coffee. Their planting and growing cycles are carefully timed: after seven months, they can collect the yucca; after two to three years, the sinini and asaí; and, after four years, the cocoa. This way, they constantly have products to sell and generate income.

Eliza’s father had always cultivated this way. Now, the support of the ACCESOS project has allowed her and her business partners to expand on his model and improve it. In recognition of her traditional knowledge, the project has also certified her as a cocoa grower.

This kind of qualification could get her a good job outside of Filadelfia – but these days, she wouldn’t trade her place in the world for anything.

“Here in the countryside, my life is better than in the city,” she says. “I generate my own income and, more importantly, my children are growing up in a healthy environment. I’m happy to be here, because I can keep promoting this agroforestry system my father put in place.” 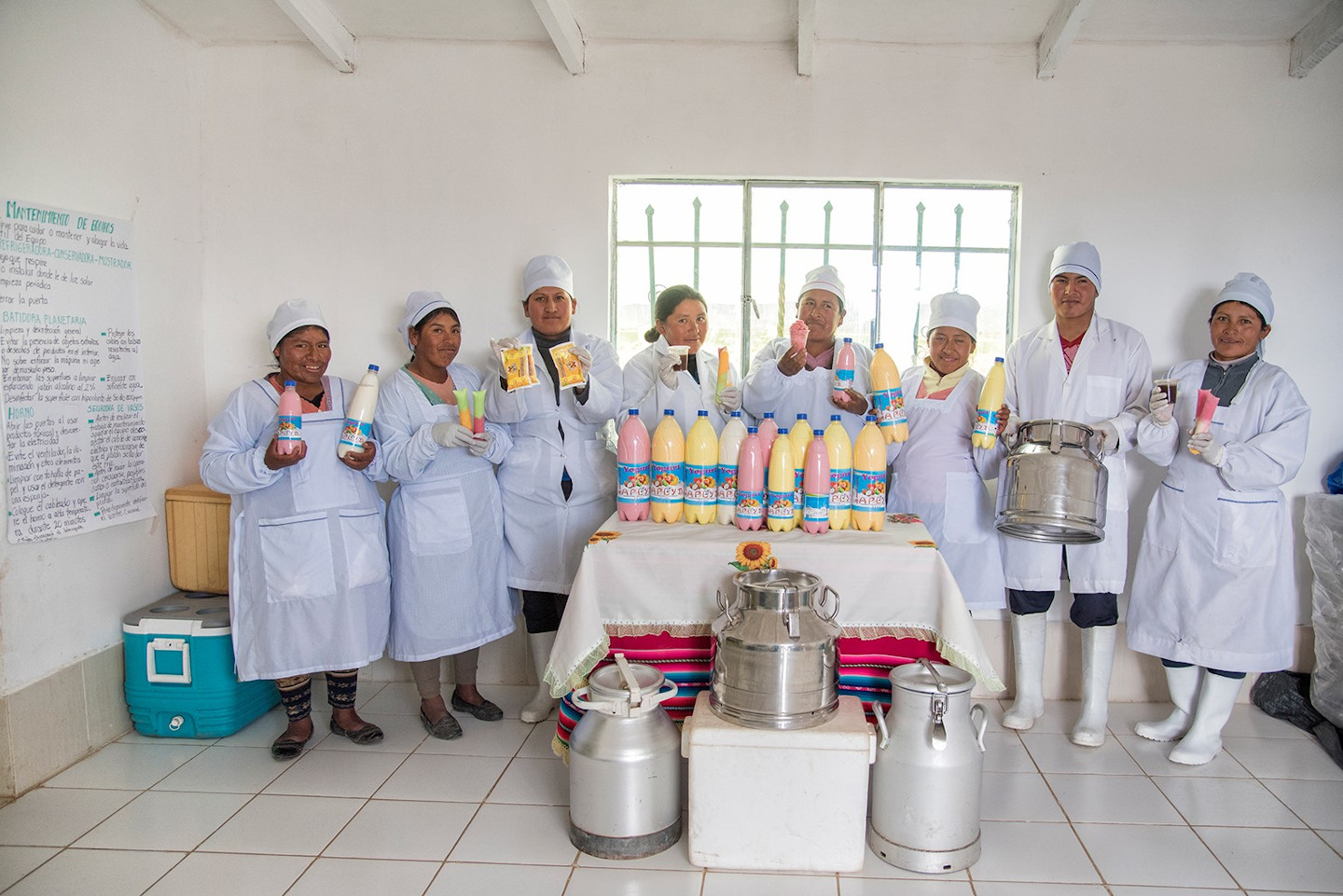 In their new industrial kitchen, Irma and members of the dairy association show off some of their yogurt products.  (© Juan Manuel Rada )

After finishing secondary school, Irma Guarachi left her rural village of Jatita Este to study at the university in nearby Oruro, a city in western Bolivia. But she soon discovered she didn’t like the bustle of city life – and so she returned to Jatita Este five years ago, determined to get more involved in her community.

For as long as Irma could remember, Jatita Este had been trapped in a vicious cycle. Most families, Irma’s among them, raised cows for meat and milk. They also produced cheese to sell in nearby cities, but they had never been able to get a good price: typically, only three bolivianos (about US$0.5) per piece. There are plenty of other milk byproducts besides cheese, of course – ones that could sell for a better price than cheese, too – but the village couldn’t produce them because they didn’t have the right equipment, nor enough funds to purchase it.

In 2016, one year after Irma’s return, she and a group of friends, all of them women, heard about ACCESOS, and they decided to prepare an investment plan to ask for the project’s help in finally upgrading their village’s equipment. With their plan approved, they joined together to form a local Milk and Dairy Producers’ Association – with Irma as the founding president. Thanks to the project’s support, they were finally able to fund an industrial kitchen and stock it with pans, refrigerators, incubators, tanks and thermometers – everything they needed to produce yogurt. A year after that, thanks again to ACCESOS and the support of their municipality, they invested in further improvements to help them meet hygiene standards.

“This is when our lives definitively changed,” says Irma, now 27.

Today, while they still produce cheeses, the association’s main focus is yogurt – on a typical day, they can produce 50 2-liter bottles. Their true specialty is bolos, a traditional dessert similar to frozen yogurt, which they offer in dozens of different flavors.

“We’re no longer obliged to just sell cheese and to give away the cows, because now we can produce quality dairy products,” Irma adds. “We still have things to improve, but we do know this model is right, because the milk triples its value when processed.”

The benefits extend beyond their small company, too: during busy weeks, they have to buy milk from neighboring producers because their own cows can’t keep up with the demand. These producers get to make some extra income – without incurring the usual transportation costs, either.

Irma is convinced that working with the association has opened up more opportunities for her than staying in the city would have.

“Ever since we founded the group, I’ve grown a lot,” she says. “I’ve been able to travel, to get to know many people that I otherwise never would have met. I’ve learned a lot and I’m always investigating and experimenting to develop new products. I myself am surprised by how far I’ve come – or how far we’ve come.”

“I don’t regret having come back,” she continues. “Most of the jobs in the city are very tiring and imply a lot of sacrifice. But here, we have everything we need.”