It’s not often that we have the opportunity to see how rural people see themselves. International organizations like ours tell their stories armed with cameras, notebooks and laptops – and, of course, our own point of view, which is important to compare with theirs, with the reality of their lives and thoughts, with their voices and visions.

This is especially true in the case of rural youth, who are often underrepresented in the decision-making of rural producer organizations and have fewer options to make a living out of agriculture and related economic activities.

The photo contest Youth and Rural Development, part of the Rural Youth Innovation Award organized by IFAD, sought to fill that gap and provide a glimpse of how Latin American and Caribbean rural youth see their own lives.

We received stunning photos from dozens of young people across the entire region – pictures that portray moments of intense work in the fields, bring to us the astonishing beauty of rural landscapes and show rural youths’ pride in making their living out of farming.

Ten of the best pictures were selected from among the participants. This photo essay showcases these works. It’s a rare opportunity to have a look not only at a panorama of the beautiful Latin America and the Caribbean region, but also at the outlook of rural youth on their own lives.

Let's start the visit to the photo exhibit approaching the region by sea. 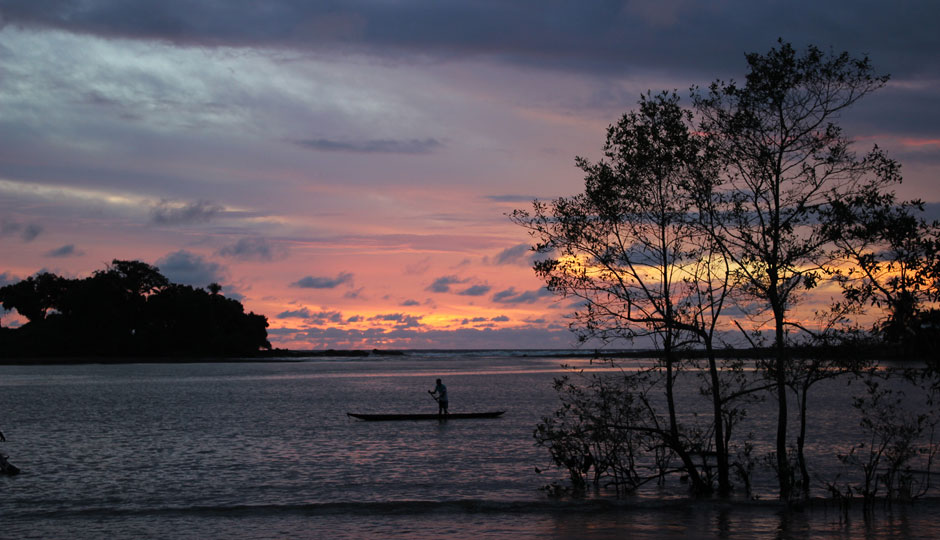 It’s dusk, when at La Barra, a small town in Valle del Cauca Department, on Colombia’s Pacific coast, a fisherman with a fishing rod in hand throws himself into his canoe to look for the catch of the day in the depths of a mangrove forest. Fishing has become more and more difficult in the area because of efforts to expand the nearby Buenaventura port. The surrounding ecosystem, including the Urambu National Park, is threatened by the constant flux of goods, mud and waste. This picture was taken by Juan Carlos Ordóñez Reyes, watching from the sidelines. 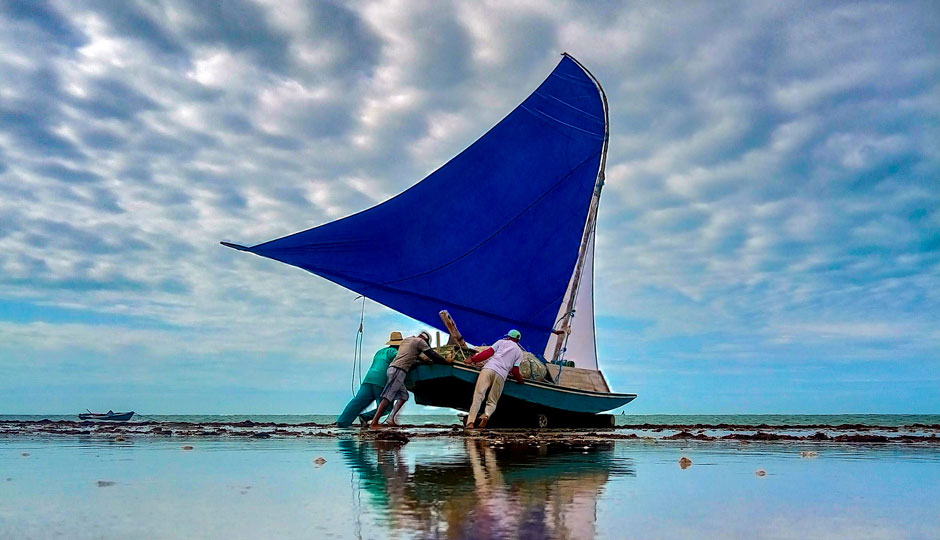 On the other side of the South American continent, Caetanos de Cima, Ceará is a traditional community of fishermen and farmers who defend their territory and culture on Brazil’s Atlantic coast. Artisanal fishing is one of the two main sources of income for the community. Unfortunately, many fish species are under severe threat of extinction. In this photo, taken by Graciele Sousa da Silva, young and older members of a fishing family push their boat to the sea to start another day of hard work. 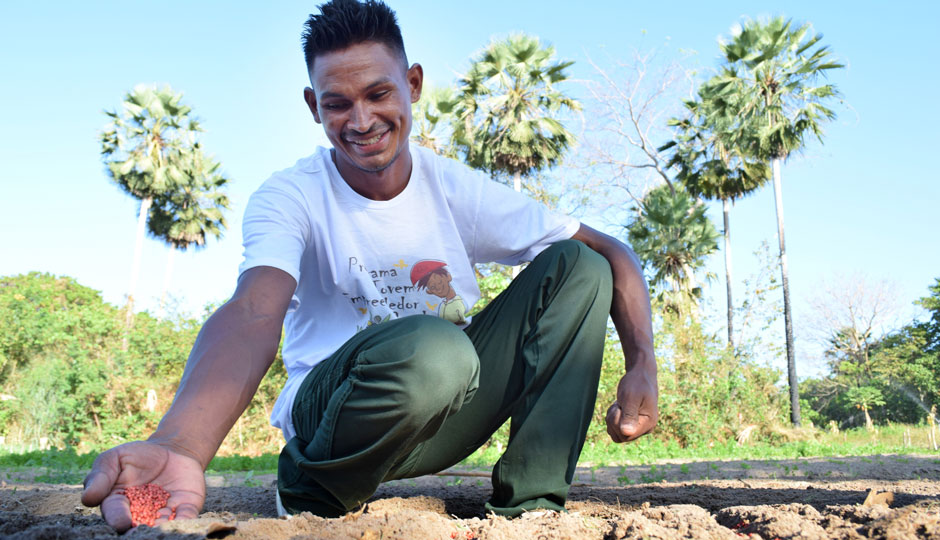 Still in Ceará, but going inland, we arrive at the Coité Pedreiras community. That’s where Elionardo Oliveira took this picture of João Paulo de Almeida, a 31-year-old rural entrepreneur looking proudly at his land. He has always worked in agriculture: he used to help his parents plant corn and beans, the typical staple crops of north-eastern Brazil. Nonetheless, he always wanted to go beyond tradition and take on new challenges, and that’s why he started diversifying his production. Today he plants herbs and vegetables such as coriander, chives, lettuce and carrots that he sells within the community and in neighbouring towns. 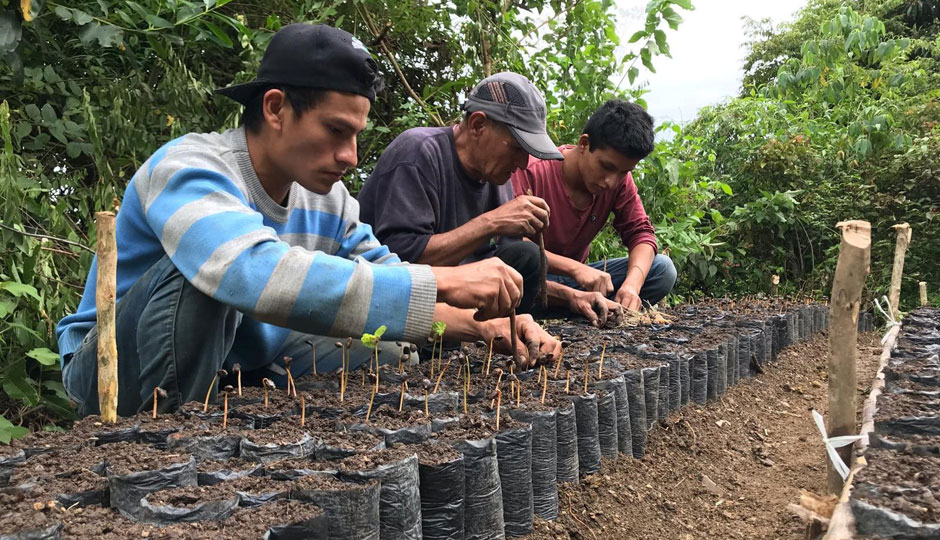 Speaking of crops, coffee is one of the most popular ones across the continent. The Guerrero family has been in the coffee farming business for over 60 years. They produce sustainable coffee in La Coipa, Cajamarca, Peru. Their hope is that their two sons, who just came back to their father’s farm after finishing university, can inherit the family’s fertile land. This picture by Zein Alasman shows how father and sons share more than blood and surname: they also share the view that youth and rural development go together. 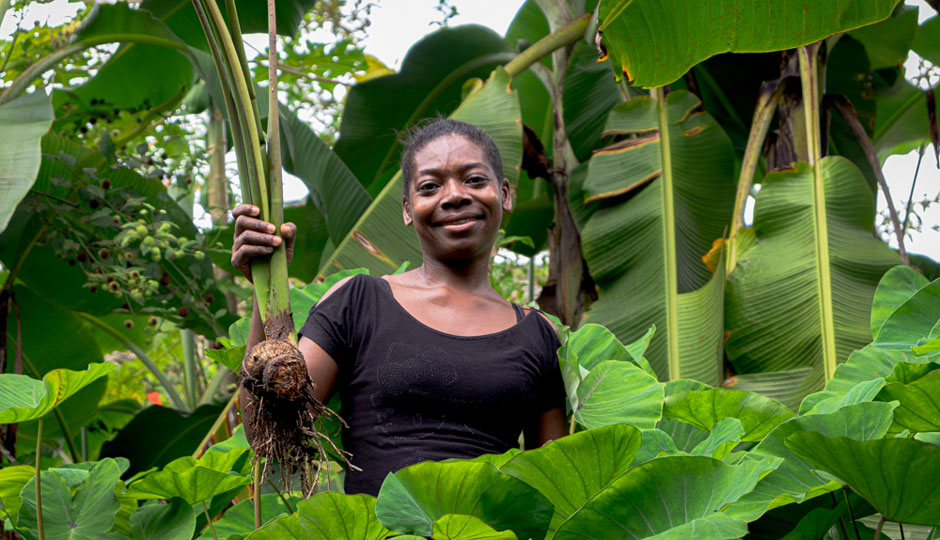 Potato is, no doubt, another major crop in Latin America. Agricultural scientists are always looking for new, more productive and more resilient varieties, and the so-called Chinese potato (Colocasia esculenta (L.) Schott) is one of them. These tubers, produced in humid tropical conditions, get their start in Bajo Calima, Buenaventura, Colombia and are then marketed all over the country. Luz Helenga Longa shows one of these potatoes with pride, feeling blessed for having contributed to developing this innovative product. This picture, taken by Lilia Yoana Cuero Castro, attests to how young people contribute to the innovation and development of the rural and agricultural sector and, therefore, to their country's economy. 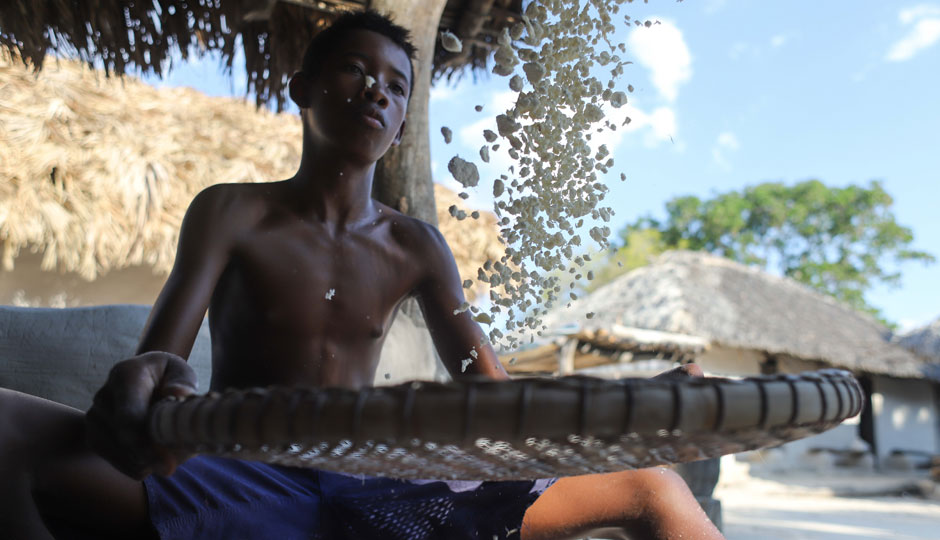 Along with potato, manioc is probably the most popular tuber across the whole region. This picture was taken by Nicolas Eduardo Cabrera in Vão de Almas, Brazil. It’s one of the 39 communities that are part of the Kalunga territory, the largest of the quilombo (settlements founded by African-Americans who, centuries ago, escaped from slavery). It depicts the young Alceni Torres shaking the ground manioc to help it dry. This idyllic scene is threatened today by a hydroelectric dam project that will force the community’s inhabitants out of their land. But quilombolas are fighting back, trying to stop the project and betting instead on ecologically sustainable production that upholds their right to their ancestral land. 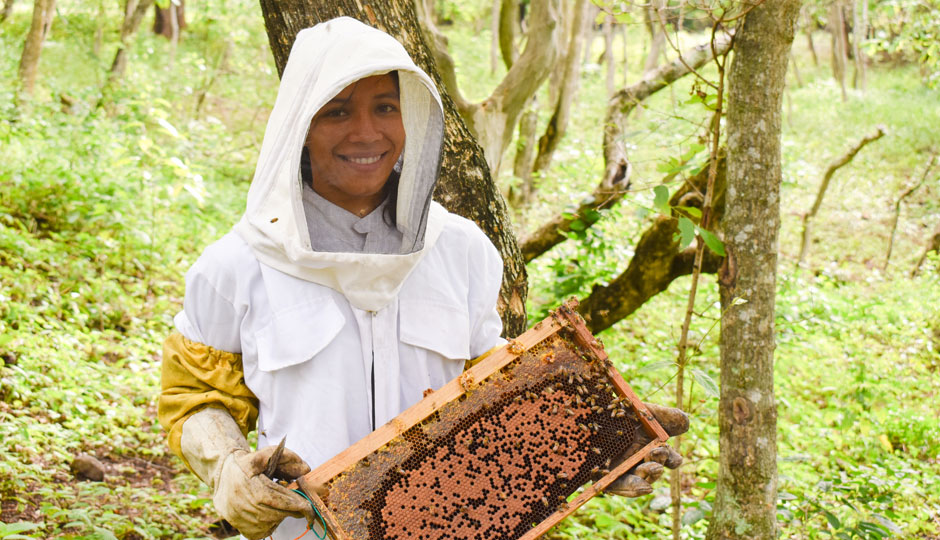 This smiling woman was photographed at Aguas Calientes, Somoto, in the Department of Madriz, Nicaragua by Hazell Verónica Flores Dávila. She’s a participant in a group of young people dedicated to beekeeping, an undertaking they went into as an alternative to standard grain production, which has been on the decline in recent years due to the effects of climate change. In addition to honey, they also produce by-products such as propolis, pollen and wax. They also reforest their communities by planting flowering trees that feed the bees. 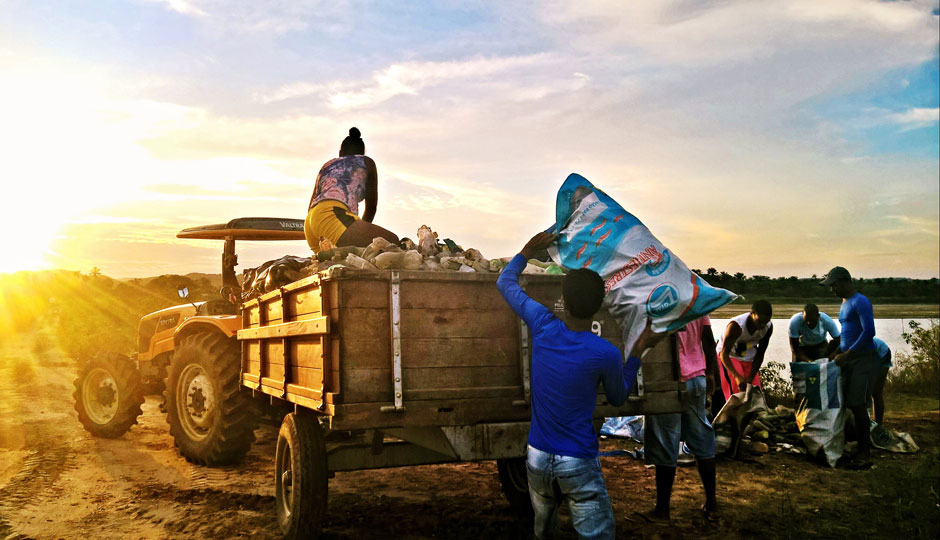 This picture, taken by Michel Pamponet with a simple cell phone camera, nevertheless captures a moment of great beauty. The beams of the sunset light fall upon a trailer packed with garbage collected by young people from the Acupe community in Santo Amaro municipality, Bahia State, Brazil. The picture shows all the energy and strength of rural youth who, with a day’s worth of hard work, managed to clean up an area of about five square kilometres of mangrove forest. 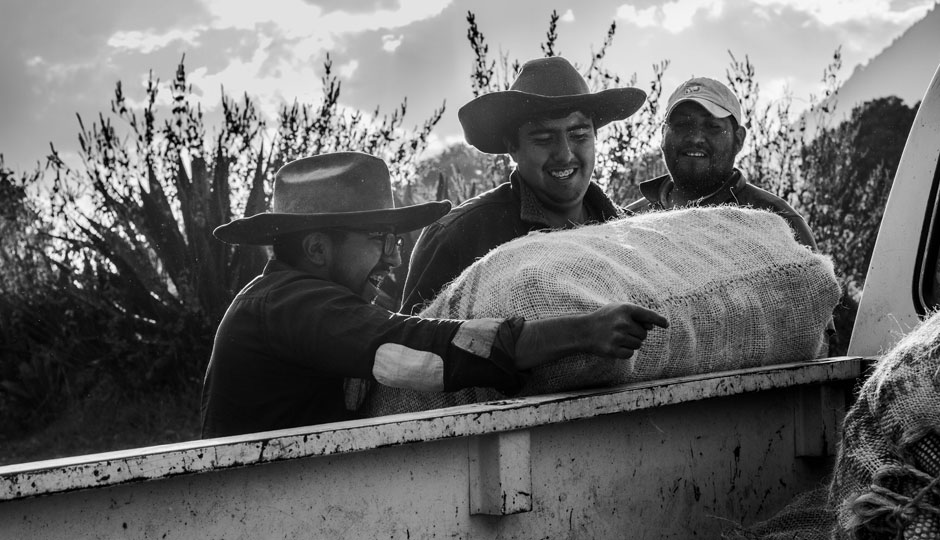 Costaleros is the name that Mexican people give to those who carry sacks of corn. It is hard work, but it also has its joyful moments, like the one captured in this photo by Axel Arellano. Just seconds before Axel shot this photo, the costalero on the left was unable to lift the 60-kilogram bag into the truck, and the young man in the middle came in quickly to help him. The scene sparked laughter in San Pedro Tlanixco, an indigenous city in Tenango del Valle, Mexico State, Mexico. 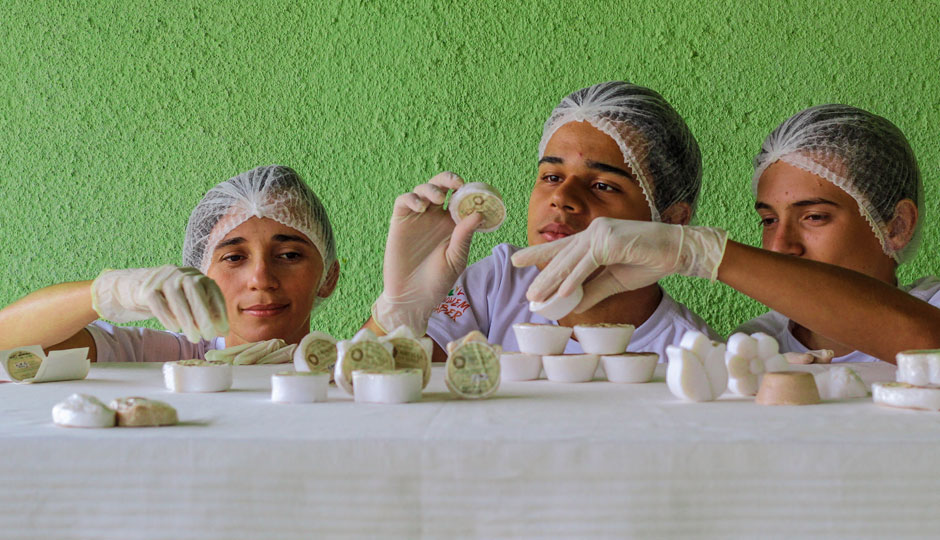 In the municipality of Ipueiras, Ceará, Brazil, a group of young people called “Juventude Agrícola da Serra” (The Sierra’s Agricultural Youth) was photographed by Gonçalo Arecido Martins while processing babaçu coconut oil to produce ecological soaps. Together with a group of babaçu coconut breakers – both of them supported by the IFAD-funded Paulo Freire Project – this organization of young innovators is using oil soaps as a way to make extra income for their community.

All the pictures you’ve seen reflect the lives of rural youth in Latin America and the Caribbean. Beyond bearing witness to these scenes, these youth are also key players in all stages of food production and supply. IFAD programmes have supported Latin American rural youth for more than four decades, working to increase their income, productivity and resilience.

This year, IFAD will be honoured to distinguish ten innovative youth initiatives with the Rural Youth Innovation Award, for which this Youth and Rural Development photo contest is just an appetizer.